In a rare media interview, Apple's senior vice president of hardware technologies, Johny Srouji, discussed Apple's transition to Apple silicon for the Mac, the challenges of developing chips for the Mac amid a global health crisis, and more. 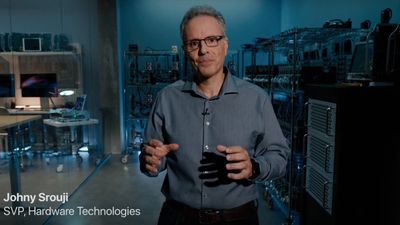 The interview with The Wall Street Journal offers a unique glimpse at Srouji, who is often seen during Apple events discussing Apple's latest chip for the iPhone, iPad, and Mac and serves on Apple's leadership team.

Srouji joined Apple in 2008 and was tasked with leading the development of chips for the ‌iPhone‌ and in 2015 Srouji joined the company's leadership, reporting directly to CEO Tim Cook. Through his work leading the team that builds chips for all of Apple's products, Srouji's team's influence and importance in product development at Apple grew significantly over the years, according to a former Apple manager.

A former engineering manager said Mr. Srouji's team had become central to product development and his influence quietly grew over the years, especially as he demonstrated the ability to balance engineering needs and business imperatives.

Srouji's team at first consisted of around 45 engineers, but now includes over a thousand spread out across the world. One challenge that Srouji's team was uniquely equipped to handle was the global health crisis, which pushed remote work to become the norm.

"What I learned in life: You think through all of the things you can control and then you have to be flexible and adaptive and strong enough to navigate when things don't go to plan," Mr. Srouji, Apple senior vice president of hardware technologies, said in a rare interview. "Covid was one for example."

As the global health crisis began, Apple was in the stages of validating the M1 chip, the company's first Apple silicon chip for the Mac. The validation process includes engineers carefully inspecting the chips, their transistors, and every component. Due to the circumstances deeming this impossible, Srouji's team had to set up cameras throughout labs that they would then use to remotely inspect each and every chip.

Delaying the progress of new chips wasn't an option. So Mr. Srouji worked to design a new testing process on the fly. The team set up cameras throughout the labs so engineers could inspect the chips remotely, people familiar with the work said. It was the kind of change that would have once been hard to imagine from Apple, where secrecy and control are paramount.

In part, the operation was able to pivot so seamlessly because Mr. Srouji's team is spread out around the globe, already accustomed to conducting business through video calls and working across time zones as they coordinated work in far-flung locations such as San Diego and Munich, Germany, two places where the company is investing billions to expand into designing chips for its wireless-technology capabilities.

A more technical challenge that Srouji's team faced was building Apple silicon chips for that Mac that tailor to the wide range of Mac products, from the lowest-end MacBook Air to the highest-end Mac Pro that currently costs well into the tens of thousands of dollars.

As Apple’s hardware engineers sought to design the chips as efficiently as possible for its particular needs, the company’s software designers tuned the computers to favor the specifications it most desired, such as smooth videogame graphics.

"First and foremost, if we do this, can we deliver better products?" Mr. Srouji said of the debate. "That's the No. 1 question. It's not about the chip. Apple is not a chip company."

Next, he said, the team had to figure out if it could deliver and execute while building up the muscle to handle more products and predicting where technology was going. Apple would need to stay on top of developing components for next-generation products while pumping out hundreds of millions of devices a year.

Behind closed doors, Srouji is "known for demanding hard truths with the axiom that his meetings focus on problems, not successes," according to the report.

Apple's latest and most powerful chip, the M1 Ultra, is a combination of two M1 Max chips put together. As for what's next for the Mac and Apple as a whole, Srouji remained tight-lipped in typical Apple fashion, saying "I’m not going to talk about any of that."

cloudphrenia
I imagine his compensation is a blank check.
Score: 28 Votes (Like | Disagree)

nwcs
Too bad there aren't more tech leaders like him. I've had to suffer through a lot of weak managers who could only focus on successes, could never say no, and couldn't handle the truth even if gently handed to them.
Score: 15 Votes (Like | Disagree)

That background furniture looks far more real-world compared to the set piece they have in pre-recorded Apple events.

TheYayAreaLiving ?
Nice interview! I have lots of respect for Srouji. He should definitely be considered to be running Apple. M1 chips is his baby and he has done a stellar job.
Score: 12 Votes (Like | Disagree)

Steve Jobs would have loved it.

The Apple chips are really amazing. There's no telling where these advances will take technology in the next 5 years.
Score: 11 Votes (Like | Disagree)

JPack
That background furniture looks far more real-world compared to the set piece they have in pre-recorded Apple events.
Score: 11 Votes (Like | Disagree)
Read All Comments