Apple plans to bring satellite connectivity to the Apple Watch in the future, which would allow for emergency texting and SOS response features directly on a wearer's wrist, Bloomberg reports. 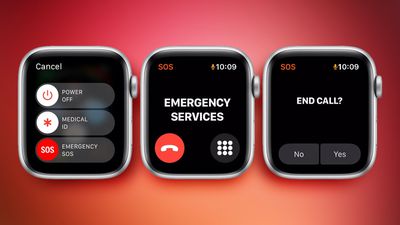 The feature ultimately did not materialize in the ‌iPhone 13‌ lineup, but Bloomberg reports today that the feature could launch as early as this year with the iPhone 14. Following its launch on the ‌iPhone‌, Apple is planning to bring the technology over to the Apple Watch.

Apple's plan includes two parts to let users leverage satellite connectivity. The first, called "Emergency Message via Contacts," would let users send short text messages to emergency services and contacts over a satellite network when there is no available cellular signal. The new protocol would appear with gray bubbles inside of the Messages app.

The second component would let users report a crisis, such as a car, boat, or plane crash, to relevant authorities. Per a Bloomberg report from August of last year:

The second emergency feature is focused on letting users report a crisis. The phone will ask what kind of emergency is happening, such as whether it involves a car, boat, plane or fire.

The system is also able to take more specific information, such as a person falling overboard or a ship sinking. It will ask a user if search and rescue services are needed, if there is suspicious behavior or weapons involved, and if a person has suffered a traumatic injury.

As expected, Bloomberg cautions that the feature will be dependent on local regulation and availability, adding "they’re not designed to work in every country."

This is total BS. This would require a large antenna, clear view of the sky, and enough power to make your fingers fall off.

Maybe checkout Garmin InReach if you think this technology doesn’t exist in such small sizes….
Score: 11 Votes (Like | Disagree)

Danfango
I will buy this the day it comes out. I spend a lot of my time in places with no cellular networks.
Score: 10 Votes (Like | Disagree)

Okay correct me if I'm wrong

I remember reading a story from 10+ years ago where a guy was lost in the ocean or a forest and he activated his SOS and it cost tens of thousands of dollars...?

Thats where the Apple Health+ subscription kicks in.
Score: 8 Votes (Like | Disagree)

Iridium Constellation (been in operation since 1998) has been doing this for YEARS, their device are small when needed, people seems to forget that there ARE constellations (multiples of them) before Starlink, and all the other new comers.

I want this to be true, as a backpacker, but I doubt it. The Garmin inReach mini is considerably larger than the Apple Watch, and it includes a large* antenna.

* Relative to the hidden antennas of a modern phone and Apple Watch, though small compared to a CB radio antenna, for example.
Score: 6 Votes (Like | Disagree)

xyz369
Cool, this feature will actually be able to save a person somewhere in the mountains where there is no signal.
Score: 6 Votes (Like | Disagree)
Read All Comments

Wednesday September 7, 2022 3:35 pm PDT by Juli Clover
With the iPhone 14 models, Apple is introducing a new Emergency SOS via satellite feature that is designed to allow emergency messages to be sent even when cellular and WiFi connections are unavailable. We thought we'd highlight some of the features of the new satellite functionality for those of you who are curious about how it works. When It Works Satellite connectivity is available to...
Read Full Article • 275 comments

Thursday September 15, 2022 7:55 am PDT by Joe Rossignol
All four iPhone 14 models include a new Emergency SOS via Satellite feature that is set to launch in November in the United States and Canada, and a new report today claims that Apple plans to expand the feature to additional countries over time. Apple reportedly informed Swiss website MacPrime that it plans to announce additional countries for Emergency SOS via Satellite later this year,...
Read Full Article • 102 comments

Monday August 29, 2022 9:05 am PDT by Juli Clover
Apple is indeed working on satellite connectivity for the iPhone 14 and completed hardware tests for the feature ahead of mass production, according to Apple analyst Ming-Chi Kuo. Kuo says that Apple has the hardware support for satellite connectivity, but whether the iPhone 14 will support satellite communications depends on "whether Apple and operators can settle the business model." The...
Read Full Article • 102 comments

Friday August 26, 2022 7:27 am PDT by Joe Rossignol
Apple may announce its long-rumored satellite connectivity feature for the iPhone 14 next month, according to Tim Farrar, a satellite communications consultant at California-based research firm Telecom, Media and Finance Associates. In a series of tweets, Farrar said T-Mobile's and SpaceX's satellite connectivity announcement yesterday was likely intended to pre-empt Apple's announcement of...
Read Full Article • 190 comments

Wednesday April 6, 2022 2:25 am PDT by Hartley Charlton
The iPhone's Emergency SOS feature has saved a British snowboarder's life after he fell into a crevasse at 10,000 feet in the Swiss Alps, Australia's 7 News reports. 41-year-old personal trainer Tim Blakely was snowboarding alone at 10,000 feet in the Alps before falling over 13 feet into a hidden crevasse. Blakely landed on a fragile snow bridge that prevented him falling any further, but...
Read Full Article

Thursday September 8, 2022 10:55 am PDT by Juli Clover
With the launch of the iPhone 14 models yesterday, Apple introduced a new Emergency SOS via satellite feature that's designed to allow iPhone users to get emergency help in off-the-grid areas even when a cellular or WiFi connection is not available. Apple is using Globalstar satellites for the endeavor at the current time, but SpaceX and Tesla CEO Elon Musk claimed today that his company has ...
Read Full Article • 164 comments

Some iPhone 14 Owners Unable to Use AirDrop With Contacts

Monday September 19, 2022 9:42 am PDT by Juli Clover
AirDrop is not functioning as intended on some iPhone 14 models, according to numerous reports on the MacRumors forums and from MacRumors readers about the issue. When attempting to send a file from an iPhone 14 to the iPhone of a contact, affected users are not able to get the transfer to complete. A file sent to a contact shows a "Waiting" message indefinitely, with the person on the other ...
Read Full Article • 100 comments