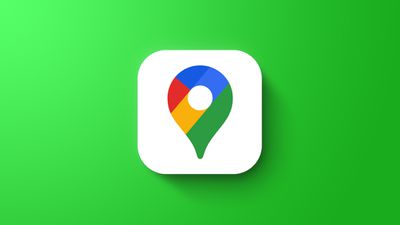 There is a more detailed navigation map that Google says is designed to make it easier for people to drive on unfamiliar roads. Google Maps will show traffic lights and stop signs along the route, and enhanced details like building outlines and areas of interest.

In select cities, Google will provide even more information, such as the shape and width of a road, including medians and islands. The feature is rolling out to iOS and CarPlay users in select countries "in the coming weeks."

On drives that involve toll roads as part of the directions, Google Maps will now provide an estimated toll price before you begin navigating. Google will look at factors like the cost of using a toll pass or other payment methods, along with what day of the week it is, to provide an estimate.

Google will show both toll routes and toll-free routes, and users can still use the "avoid tolls" toggle to always see toll-free routes. Toll prices will be available for 2000 toll roads in the U.S., India, Japan, and Indonesia this month, with support in other countries coming soon.

Google is adding a new Apple Watch experience that will let users get directions on Google Maps directly from the watch. In a few weeks, Google Maps users will be able to tap on the Google Maps shortcut in the Apple Watch app and then start navigation without the need for a connected iPhone. There's also a "Take me home" complication that's coming to make it easy to get quick directions back to a set location.

There are also several other updates that will improve Maps on iOS. Google is adding a new pinned trip widget that will let users see trips that have been pinned in the Go Tab right on the iOS Home screen. The widget will display arrival time, the next departure time for a transit trip, and a suggested route when driving.

The existing Google Maps search widget will be updated to be smaller, and soon, Google plans to add Google Maps integration directly into Spotlight, Siri, and the Shortcuts app. Once set up, users can say "Hey ‌Siri‌, get directions" or "Hey ‌Siri‌, search in Google Maps" to use the new functionality. These features will start to be available in the coming months, with enhanced ‌Siri‌ functionality coming later in the summer.

RedTheReader
Inb4 “Why use Google?! You want your data stolen and sold to the butterfly living in the third chimney down the lane?! HUH?! Do yuh?!”

I use Apple Maps because I prefer the UI and it works dependably in my area, but man, doesn’t telling people who’re using Google services what they already know get old?
Score: 9 Votes (Like | Disagree)

w5jck
Google Maps is better than Apple Maps, and has been forever.
Score: 8 Votes (Like | Disagree)

DocMultimedia
Wherever I do long trips I always do Google maps one way and Apple the other. Apple has drastically improved and I think I use that one more often now.
Score: 6 Votes (Like | Disagree)

somethingelsefl
Google Maps is the smart kid in classes who does everything right, but tattles on the kids.

Apple Maps is the attractive kid in the corner that everyone likes only because the don’t want to deal with the other kid who tells on them all the time
Score: 6 Votes (Like | Disagree)

kiensoy
Gotta be nice updating Google Maps on iOS and watchOS without having to wait for a whole OS update.
Score: 6 Votes (Like | Disagree)

jonnysods
The AW support would be interesting - but I'm trying to avoid GM and try AM exclusively. Trying hard to avoid Google but it ain't easy.
Score: 5 Votes (Like | Disagree)
Read All Comments