At Tuesday's "Peek Performance" event, Apple introduced refreshed versions of the iPhone SE and iPad Air. Both devices are available for pre-order from today, along with Apple's new Green and Alpine Green color options for the iPhone 13 and iPhone 13 Pro. 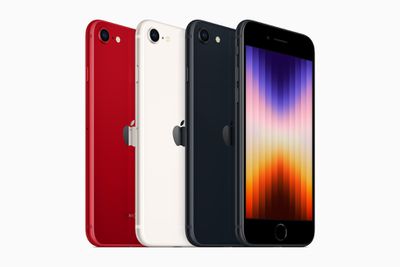 The new ‌iPhone SE‌, which replaces the second-generation version, starts at $429, up from $399 on the 2020 model. It features the same A15 Bionic chip as the one used in the ‌iPhone 13‌, 5G connectivity, up to 256GB of storage.

The new ‌iPad Air‌, which replaces the fourth-generation version, starts from $599, and features Apple's powerful M1 chip that has previously only been seen in Apple's tablet lineup in the iPad Pro, as well as up to 256GB of storage.

Like the ‌iPad Pro‌, the ‌iPad Air‌ supports the $129 second-generation Apple Pencil and it works with the $299 Magic Keyboard with trackpad that Apple offers.

Available in a new array of colors, the ‌‌iPad Air‌‌ features Apple's Ultra Wide front camera with Center Stage for a more natural video conferencing experience, a USB-C port with up to 2x faster transfer speeds, and 5G on the cellular models.

Both the new ‌iPhone SE‌ and ‌iPad Air‌ will be delivered to customers starting on Friday, March 18.

UltimateSyn
Put in an order for a Blue 256GB Wi-Fi Air and a White Magic Keyboard. Delicious.
Score: 8 Votes (Like | Disagree)