Apple today introduced the Studio Display, a lower-cost display option that's meant to go along with the Mac Studio. The Studio Display is priced starting at $1,599, making it much more affordable than the Pro Display XDR, but not at the attractive $999 price point of the long-discontinued Thunderbolt Display. 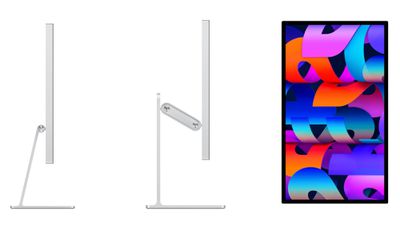 Though the base Studio Display is $1,599 for the display itself and an included tilt-adjustable stand, Apple has expensive add-on accessories and updates, continuing a trend that we've seen for many of the past "Pro" product debuts.

Adding nano-texture glass, which is the same low reflectivity glass available for the Pro Display XDR, will cost an extra $300 over the base price. including the tilt and height-adjustable stand will cost an additional $400. The VESA Mount Adapter can be selected for no additional cost.

The Pro Display XDR made headlines when it was released because a stand was not included and was priced at an additional $999. Apple included a stand this time around, but users will need to pay extra for the high-end stand shown off on stage.

Those who want the top-of-the-line Studio Display with the upgraded stand and glass will need to pay a total of $2,299. That's still less than half of the price of the Pro Display XDR, which continues to be priced starting at $4,999.

The Studio Display features a 5K 27-inch display, while the Pro Display XDR is a 32-inch 6K display. The Studio Display maxes out at 600 nits brightness and it doesn't have the same Extreme Dynamic Range, but Apple has added a 12-megapixel camera with Center Stage support and an A13 Bionic chip to support the camera and speaker systems.

Customers can order the Studio Display starting today, and it will be available on March 18.

dannyyankou
$400 just to adjust the height? I remember when that was a standard feature on the G4 iMac.
Score: 35 Votes (Like | Disagree)

timmodugdale
I'm very disappointed in the price of this display. It is a lovely display, to be sure — well worth the money. That said, creating two monitors for designers/developers and zero for average consumers is strange to me. There are many people who want a decent monitor (other than crappy LG or Dell monitors) that match their Apple computer. If it costs a bit more than one of those crappy $300 monitors, fine. The average consumer isn't going to spend $1500 on this monitor and doesn't need this level of a monitor. I guess I will keep waiting and hoping.
Score: 26 Votes (Like | Disagree)

jml1982
To me it's far too expensive for what it is, and an additional $400 just to adjust the height?! And I def don't want my monitor to have built in speakers or even a camera... Also, it should have more ports, like ethernet for MacBook Pro users.
Score: 15 Votes (Like | Disagree)

wyarp
Are Apple turning into purveyors of computer tech only for the super rich... or Russian Oligarchs now?
Score: 11 Votes (Like | Disagree)

Planetary
The non height-adjustable version of the monitor stand does not meet modern health and safety rules for the workplace. It would actually be illegal to deploy in an office.

Somehow, every other manufacturer's monitors come with an adjustable stand for free.
Score: 7 Votes (Like | Disagree)
Read All Comments

Monday March 21, 2022 9:26 am PDT by Joe Rossignol
While fine print on Apple's website says Studio Display stands and VESA mount adapters are "not interchangeable," customers can visit an Apple Store or Apple Authorized Service Provider to have their Studio Display reconfigured after purchase. For example, if a customer bought a Studio Display with the standard tilt-adjustable stand and later decides they want to use a VESA mount adapter,...
Read Full Article • 199 comments

Wednesday March 9, 2022 4:09 am PST by Sami Fathi
Apple's new Studio Display comes with three different mounting options - a normal stand that only tilts, a tilt and height-adjustable stand, and a VESA mounting adapter. What's crucial to note is that the stands are built into the display and, thus, are not interchangeable. When placing an order for the Studio Display, Apple warns that "each stand or mount adapter is built in. They are not...
Read Full Article • 306 comments