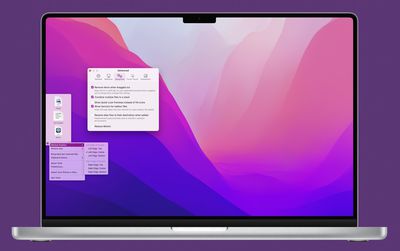 For those unfamiliar with the app, Yoink aims to simplify the action of dragging and dropping files and app-content on the macOS desktop by providing a temporary place for files to be dragged to. Yoink's shelf fades in when you start a drag - either with files from Finder or app-content, like an image from a website - offering you a temporary place for your dragged files.

With files temporarily docked in the Yoink shelf and the cursor free, users can more easily navigate to the intended destination of files, which is handy when moving and copying files between different windows, Spaces, fullscreen apps, or devices via Handoff.

Today's v3.6.5 update brings back the defunct Objective-C based Yoink widget, only now written in Swift, offering previously unavailable functions. The widget comes in medium and large sizes, and provides quick access to Yoink's clipboard history, allowing users to select up to six previous copies of items in the medium widget and up to 12 in the larger one. Clicking an item in the widget copies it to the clipboard, ready for pasting elsewhere.

Individual widgets can also be configured to show specific data types (images, text, links, or files), and each widget has a Pin feature that allows items to be pinned to the top so that it doesn't go away when other items populate the clipboard.

In addition, Yoink v3.6.5 comes with a clipboard history browser, where users can organize copied items with actions like pin, unpin, delete, send to Yoink, copy, and clear history.

In other changes, rather than a TIFF file, a PNG file is now created when pasting image data into Yoink. Yoink also transparently provides PNG and JPEG data when dragging out images of the types HEIC, HEIF or TIFF to broaden compatibility with other apps.

Yoink runs natively on Apple Silicon and Intel Macs, although note that this version of Yoink increases the minimum system requirements from macOS 10.10 Yosemite to macOS 10.12 Sierra. Yoink v3.6.5 is available on the Mac App Store as a $8.99 one-time purchase and updates are free to existing customers. Yoink is also available for iPad and iPhone.

Wow, sounds cool. It's what I really miss on Mac after migrating from windows (Win + V). Does this app impact performance\response time?

Hi, I'm the developer of Yoink.
I can safely say that it doesn't, it's very light-weight (and continuously improve upon it).
There's a free, 30-day demo at https://eternalstorms.at/yoink/mac if you'd like to try before you buy!
Score: 20 Votes (Like | Disagree)

No5tromo
Magnet for windows management and Yoink for drag and drop, both paid apps, cause it's very hard to have essential desktop OS features built in like, I don't know, Windows maybe
Score: 5 Votes (Like | Disagree)

This should really be built-in functionality. I really like the look of it, it's super slick, but will I need it enough to justify a £9 spend? At least it's not a monthly subscription!

It should only be a built-in functionality IF Apple is committed to maintaining and developing it.

Apple has chosen certain things it will build, maintain, and develop and has left the rest up to app developers like Yoink.

The moment Apple builds something into the OS, most independent competitors will be forced out of the market. And if Apple doesn't continue developing the app/functionality, then what?

The way it is seems more than ok to me.
Score: 5 Votes (Like | Disagree)

Magnet for windows management and Yoink for drag and drop, both paid apps, cause it's very hard to have essential desktop OS features built in like, I don't know, Windows maybe

I think the majority of stuff is done better in macOS. But I do agree windows management is better in Windows by default.

Why does the apps of the window go into full screen in macOS when I hold down the mouse button on the green dot in the upper left corner of a window and choose ”Tile Window to Left of Screen”?

Fortunately there is the free and open source Rectangle: https://rectangleapp.com/
Score: 3 Votes (Like | Disagree)

Magnet for windows management and Yoink for drag and drop, both paid apps, cause it's very hard to have essential desktop OS features built in like, I don't know, Windows maybe

Is Windows not a paid app?
Score: 3 Votes (Like | Disagree)

OS X Dude
This should really be built-in functionality. I really like the look of it, it's super slick, but will I need it enough to justify a £9 spend? At least it's not a monthly subscription!
Score: 3 Votes (Like | Disagree)
Read All Comments

Monday January 10, 2022 1:04 pm PST by Juli Clover
Google recently updated the Gmail app for iOS devices, and though it's not mentioned in the release notes, the new version of the app introduces a second Gmail widget. The new Gmail widget displays the last three emails in the Gmail inbox, along with a button to compose a new email. The widget joins the existing widget that displays a compose button, a search interface, and lets users know...
Read Full Article • 32 comments

Monday June 7, 2021 1:43 pm PDT by Juli Clover
The iOS and iPadOS 15 updates that were released today introduce several expanded widget options, which can be used on the Home Screen or in the Today section of the Notification Center on the iPhone and iPad. Apple has created several new widgets for Apple products and services, as listed below: Find My - Track your friends and personal items from the Home Screen. Contacts -...
Read Full Article • 42 comments