As part of a "Steve Jobs Revolution" collection, RR Auction is this week selling off multiple pieces of rare memorabilia related to Jobs, including a check that was signed by both Steve Jobs and Steve Wozniak. 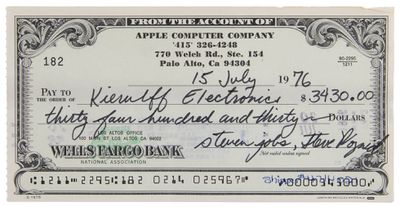 Dated July 15, 1976, the "Apple Computer Company" check is made out to Kierulff Electronics for $3,430. The check was written in the same month that Wozniak demonstrated the first Apple-1 prototype at the Homebrew Computer Company in Palo Alto, California.

The auction site says that based on the date, the check was likely used to pay for parts used in putting together the second batch of Apple-1 computers. So far, the check has a bid of over $23,000, with the next bid set at $25,000. The auction is set to end on March 17, so it could go for much more.

The check is part of a themed sale that is designed to trace the history of personal computers through documents and objects. There are prototypes and early examples of computer mouses created by Doug Engelbart, Pong prototypes from the collection of its creator Allan Alcorn, and original Apple devices.

Along with the check, RR Auction is selling a yearbook that Jobs signed, photos of Jobs as a college freshman, a Steve Jobs signed Atari job application expected to fetch over $300,000, Steve Jobs business cards, and other signed memorabilia. All of the auctions will end on March 17.

Sell the NFT and make a fortune
Score: 17 Votes (Like | Disagree)

"You're cashing it wrong!"

Not terribly far off:

TheYayAreaLiving ?
So much history. Thinking about putting an offer in.
Score: 7 Votes (Like | Disagree)
Read All Comments

Tuesday March 22, 2022 5:12 pm PDT by Juli Clover
Following the release of iOS 15.4 on March 14, Apple has stopped signing iOS 15.3.1, the previously available version of iOS that came out in February. As iOS 15.3.1 is no longer being signed, it is not possible to downgrade to that version of iOS if you've updated to iOS 15.4. Apple routinely stops signing older versions of software updates after new releases come out in order to encourage...
Read Full Article • 21 comments

Thursday August 19, 2021 7:52 am PDT by Sami Fathi
An email from Steve Jobs surfaced as part of evidence of Apple's ongoing legal battle with Epic Games, has confirmed that in 2010, the company had internal plans of working on an "iPhone nano," a possible miniature version of the iPhone 4. The email, spotted in a trove of evidence by The Verge, was sent by late Apple CEO Steve Jobs to fellow executives in October of 2010, months after the...
Read Full Article • 88 comments

Wednesday November 10, 2021 2:09 am PST by Tim Hardwick
A rare fully functional Apple-1 computer has sold for $500,000 at auction this week, according to John Moran Auctioneers in California (via BBC News). The rare Hawaiian koa wood-cased Apple-1 has had only two owners, a college professor and his student to whom he sold the machine for $650. The sale included user manuals and Apple software on two cassette tapes. Apple co-founder Steve...
Read Full Article • 24 comments

Wednesday November 3, 2021 6:36 am PDT by Sami Fathi
Ahead of WWDC in June, a mention of "homeOS" was spotted in an Apple job listing, igniting suspicion that Apple would announce some significant home-based operating system at the conference. While nothing of that sort did materialize, mentions of "homeOS," a so-far never-before-heard Apple operating system, continue to surface in company job listings. In June, the job listing "homeOS" had...
Read Full Article • 83 comments