MediaTek has conducted the world's first live demo of Wi-Fi 7 for "key customers and industry collaborators," paving the way for the wireless network technology to enter mainstream consumer hardware as early as next year, according to the company. 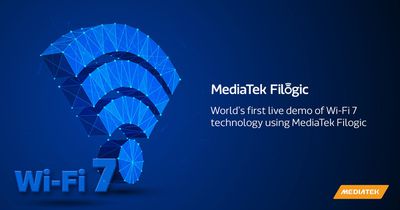 Taiwan-based MediaTek said the demos demonstrated the ability of Wi-Fi 7 to achieve the maximum speed defined by IEEE 802.11be, the official name for the Wi-Fi 7 standard. The company said it also highlighted its multi-link operation (MLO) technology. MLO aggregates multiple channels on different frequency bands at the same time to allow network traffic to still flow seamlessly even if there is interference or congestion on the bands. "Filogic" simply refers to MediaTek's Wi-Fi 7 connectivity portfolio.

"The rollout of Wi-Fi 7 will mark the first time that Wi-Fi can be a true wireline/Ethernet replacement for super high-bandwidth applications," said Alan Hsu, corporate vice president and general manager of the Intelligent Connectivity business at MediaTek. "MediaTek’s Wi-Fi 7 technology will be the backbone of home, office and industrial networks and provide seamless connectivity for everything from multi-player AR/VR applications to cloud gaming and 4K calls to 8K streaming and beyond."

Wi-Fi 7 is said to deliver 2.4x faster speeds than Wi-Fi 6, even with the same number of antennas, since Wi-Fi 7 can utilize 320Mhz channels and supports 4K quadrature amplitude modulation (QAM) technology.

The Wi-FI Alliance says Wi-Fi 7 could provide speeds of "at least 30" gigabits per second (Gbps) and should exceed that to reach 40Gbps, which is the same speed as Thunderbolt 3. As noted by ArsTechnica, Wi-Fi 6 supports speeds up to 9.6Gbps, while its predecessor, WiFi 5, has a max output of 3.5Gbps. Wi-Fi 6 is the marketing name given to 802.11ax technology, which is supported by all iPhone 11 and later models, the newest iPad mini, iPad Air, iPad Pro, and all Macs powered by Apple silicon.

The next step up from Wi-Fi 6 is Wi-Fi 6E. Devices supporting Wi-Fi 6E use a dedicated 6E spectrum with up to seven additional 160MHz channels, while Wi-Fi 6 devices share the same spectrum as other Wi-Fi 4, 5, and 6 devices, and they only operate on two 160MHz channels. Some reports suggested Apple's iPhone 13 series would include Wi-Fi 6E, but the rumors never panned out. Looking ahead, this year's iPhone 14 is expected to adopt Wi-Fi 6E and Apple's forthcoming AR/VR headset is also expected to support it to meet the needs of the high-end, immersive experience it will deliver, according to analyst Ming-Chi Kuo.

MediaTek has been involved in the development of the Wi-Fi 7 standard since its inception and is eager to drum up excitement for its Wi-Fi 7 Filogic connectivity portfolio, but the protocol hasn't been finalized by the Wi-FI Alliance yet, so it's difficult to say when consumer devices will actually support it. MediaTek says products with Wi-Fi 7 are expected to hit the market starting in 2023. Regardless, given that Apple has yet to adopt Wi-Fi 6E in any of its devices, support for Wi-Fi 7 is likely to be some way away.

RamGuy
This just in: Misleading marketing keeps on being misleading.

These numbers are the absolute best-case scenario when you aggregate performance using 6x6 320MHz. Clients will mostly stay 1x1 and 2x2 as a result of power usage and limited space for antennas.

Even with a client using 6x6 you wouldn't be anywhere close to these numbers as you are filling the entire spectrum so unless you live in a very remote area with barely any interference using up the entire spectrum all at once for a single device is not going to happen.

Their numbers for WiFi6 are just as stupid. You won't see anywhere close to 9.6Gbps using WiFi6 in any scenario.
Score: 21 Votes (Like | Disagree)

Michael Scrip
I just hope they're doing all the hard work now to make WIFI 7 good enough to last a while.

BootsWalking
Be sure to use expensive Monster cables for your wireless connection to guarantee no drop outs!
Score: 13 Votes (Like | Disagree)

Shirasaki
So, high speed, but how about energy consumption? Matching wire connection? Not to mention eavesdropping easier than wire. My iPhone XS Max can’t sustain long time continuous 4G network usage without massively thermal throttling. How about this one?

And 90% of people around the world don’t even have 10Mbps down broadband. So far the best case scenario I could see is wifi 7 paving ways for apple to wirelessly connect latest iPhone iPad with Mac, or Apple Watch with iPhone. That’s about it.
Score: 7 Votes (Like | Disagree)

hortod1
But can I still land my plane?
Score: 7 Votes (Like | Disagree)

Friday November 19, 2021 8:06 am PST by Mitchel Broussard
Amazon is offering numerous all-time low prices on Apple's 12.9-inch iPad Pro from 2021, starting at $999.00 for the 128GB Wi-Fi tablet. These sales measure up to $150 off, and all models are in stock and ready to ship from Amazon today. Note: MacRumors is an affiliate partner with some of these vendors. When you click a link and make a purchase, we may receive a small payment, which helps us...
Read Full Article • 7 comments

Thursday January 6, 2022 8:08 am PST by Mitchel Broussard
The 2020 64GB Wi-Fi iPad Air has dropped back down to $539.00 today on Amazon, from $599.00. This sale is only available in the Silver color option, and Amazon estimates that it will take about a week for the tablet to be delivered. Note: MacRumors is an affiliate partner with some of these vendors. When you click a link and make a purchase, we may receive a small payment, which helps us keep...
Read Full Article • 4 comments

Monday November 28, 2022 10:16 am PST by Juli Clover
Apple today released a Rapid Security Response update that is available for those running the iOS 16.2 beta, marking the launch of the second RSR update since the feature was released in iOS 16. The Rapid Security Response Update is designed to provide iOS 16.2 beta users with bug fixes without the need to install a full update. The initial RSR release for iOS 16.2 beta users was a test with ...
Read Full Article • 32 comments

Monday November 28, 2022 10:42 am PST by Juli Clover
Apple has cut back on its Twitter advertising, according to Twitter CEO Elon Musk. In a tweet, Musk said that Apple has "mostly stopped" its Twitter ads, asking if Apple hates "free speech." Musk went on to publish a poll asking if Apple should "publish all censorship actions" taken that impact customers and he began retweeting content from companies that Apple has had moderation discussions ...
Read Full Article • 1341 comments