Intel today unveiled new 12th-generation Core processors suitable for laptops, and as part of the announcement, it claimed that the new Core i9 is not only faster than Apple's M1 Max chip in the 16-inch MacBook Pro, but is the fastest mobile processor ever. 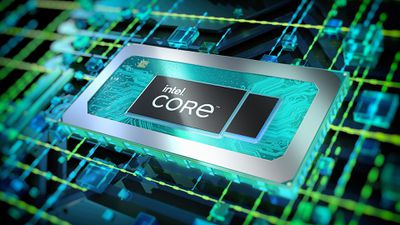 The new Core i9 features a 14-core CPU with six performance cores and eight efficiency cores, while the 10-core M1 Max chip has eight performance cores and two efficiency cores. The high-end Intel chip has a max Turbo Boost frequency of 5.0GHz, but power draw can reach up to 115 watts, which is significantly more power than the M1 Max chip ever uses and not ideal for the thermal envelope of devices like the MacBook Air and MacBook Pro.

Intel shared a very basic performance vs. power chart as part of its marketing, with fine print indicating that performance was measured based on compiling binaries with the SPEC CPU 2017 benchmark suite. Interestingly, the chart claims that the new Core i9 achieved faster performance-per-watt than the M1 Max chip, but overall the M1 Max can still operate at much lower wattages than Intel's top-of-the-line mobile offering.

"Specrate 2017 integer n-copy data is a good benchmark that we use to gauge client multi-threaded performance, and our data indicates that the Core i9-12900HK is faster performance-per-watt than the M1 Max processor in this test," an Intel spokesperson told MacRumors, when asked for comment about the results.

Of course, we'll have to wait to see how the 12th-generation Core processors perform in real-world testing for a true comparison with the M1 Max chip.

Intel's new chips are certainly fast, but Apple likely has no regrets with switching to its own custom silicon given the power efficiency of its chips, which deliver impressive performance without running hot in thin and light systems like the MacBook Air and MacBook Pro. And we're likely just months away from Apple unveiling its next-generation M2 chip that should take another leap forward in performance-per-watt.

Intel's 12th-generation mobile Core processor lineup includes 28 chips, including mid-range and low-end Core i7 and Core i5 options. The chips have entered final production and devices powered by them are expected to launch this year.

alex00100
Competition is always good. This will keeps the pressure on apple to keep delivering great results with M-chips in the coming years.
Score: 147 Votes (Like | Disagree)

New Intel-powered laptop. Hot enough to heat your office… but only for an hour!
Score: 72 Votes (Like | Disagree)

rpmurray
Intel: Our chip that isn't shipping yet is faster than a chip Apple has been shipping since October of last year.
Score: 50 Votes (Like | Disagree)
Read All Comments