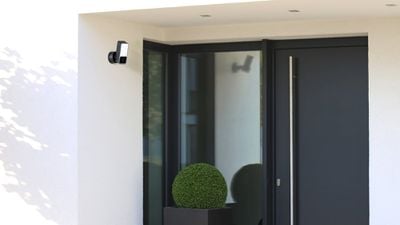 The Eve Outdoor Cam is a floodlight cam that works with HomeKit Secure Video, with 10 days of storage available with an iCloud+ subscription, which is priced starting at $0.99 per month. Thanks to ‌HomeKit Secure Video‌, the Eve Outdoor Cam is privacy focused and access is fully encrypted regardless of whether you're viewing the camera footage locally or remotely using a home hub (the Apple TV or the HomePod).

Eve Outdoor Cam features a matte black metal frame and an opaque white glass for the light component, with IP55 water and dust resistance. It is equipped with a 1080p camera with a 157 degree field of view, and it can be mounted to the wall with a three-axis hinge. Infrared night vision is available, and it supports two-way communication with the built-in microphone and speaker.

Users can receive notifications when motion is detected, and through ‌HomeKit Secure Video‌, the camera can detect people, animals, vehicles, and package deliveries for tailored alerts.

Alongside the Eve Outdoor Cam, Eve is also debuting the Eve MotionBlinds in partnership with window coverings company Coulisse. MotionBlinds are HomeKit-connected roller shades that offer easy setup and Thread connectivity for better responsiveness and reliability than other smart blind solutions.

The MotionBlinds are equipped with a rechargeable battery powered motor, and they support on-device schedules for precise control over positioning throughout the day. Eve says that the MotionBlinds use direct communication without cloud dependency for privacy purposes, with all data stored on the blinds themselves.

In addition to offering smart connectivity, the MotionBlinds also have a manual control feature and are able to be lowered with a simple pull.

The Eve Outdoor Cam will be available on April 5, 2022 from Eve and Amazon. It will be priced at $249.95. The Eve MotionBlinds are available starting today from Coulisse resellers, with details available on the Eve website.

At this point in the game, is there still a reason that *most* HomeKit enabled devices are far more expensive than alternatives?

A better way to say it is that prices vs value for IoT are all over the place. HomeKit is a reasonable (but imperfect) indication of quality, as is Eve. For example
- Nanoleaf bulbs are HomeKit (and Thread-enabled) and very reasonably priced
- Eve Button is a lousy product (but most Eve stuff is pretty good)

IoT stuff is extremely variable, so you're paying (somewhat... see above) for quality.
Bad stuff (eg a lot of the China no-name brands, even apart from privacy issues) uses a custom app (who wants ten of those on their phone?), doesn't report low batteries, has painful set-up, never updates firmware, etc.
Some cheap stuff is OK. Wyze for example are very good about firmware updates, but you still have
- no integration with the rest of the world, everything has to go through the Wyze app
- everything goes through Wyze servers (which fail a lot more frequently than they should, and sometimes internet fgails on your side...)
- random needing to restart/reboot once a month.

But Hue is expensive and, IMHO, unjustified. It's (barely) HomeKit compliant, a bad iOS neighbor, and fails in weird irritating ways. Ikea is cheap (like Wyze you can bridge it to HomeKit through HomeBridge) but more irritating to work with than Wyze because of stupid zigbee functionality which just doesn't match anything else in your compute environment (every time something goes wrong I have to spend 20 minutes reminding myself of sigbee and ikea conventions).

Bottom line is
- everything sucks way more than it should BUT
- HomeKit native (and Eve) as brands are *reasonable* heuristics for quality (meaning works well, is updated, doesn't fail randomly, etc).


For cameras in particular, what you will find is the thing you care most about is LATENCY -- how fast
- from event to a notification on your phone OR
- from tapping on your phone to seeing live video

Ring is utterly unacceptable in this respect. Don't even waste your time.
Blink is bad. They do have an excuse that they are about *extremely* low power, but if that doesn't matter to you, also not acceptable.
Wyze is not great; acceptable but only given the super-low price.

I wish reviews weighted this much higher. I'd like to know the latency for all the new high-end cameras (including this Eve model).

For blinds, as long as it works your main concern will become "how easy is it to pop out the battery or otherwise recharge it". Just visually looking at those blinds I don't see where the battery sits. Which may mean something as innocuous as "there's a USB charging port behind the blind, and you just need a long USB cable". Or it may mean "trying to pop out the battery is a serious fight, with you perched on a precarious ladder and unable to see anything you are doing...''
Ikea blind batteries are very easily popped and put back in. Full marks.
MySmartBlinds allow solar charging (which works well for some locations, though is hell if you need to rewire it...); they can also be topped up via USB at a location that's not trivial to find but not terrible to get at (not great either).
Score: 6 Votes (Like | Disagree)

For the love of god someone needs to come out with a camera with the hardware of the NEST IQ 4K outdoor cam (but actually waterproof) with no subscription (or very affordable) and HKSV support. Oh and an app that isn’t ?
Score: 3 Votes (Like | Disagree)

What's the pricing on the shades?

Quick glance at the website seems to be around $500, with a sale price right now of around $300.

Too rich for my blood.
Score: 3 Votes (Like | Disagree)

Adoniram
I have the Lutron / Serena motion blinds and they are amazing. I’m glad to see more companies getting involved to make sure competition and innovation continues.
Score: 2 Votes (Like | Disagree)

macsareveryinteresting
HomeKit is becoming a massive thing for security. I won’t be surprised if more companies join Apple.
Score: 2 Votes (Like | Disagree)

Quick glance at the website seems to be around $500, with a sale price right now of around $300.

Too rich for my blood.

Yikes. Me too. I’m not that lazy.
Score: 2 Votes (Like | Disagree)
Read All Comments

Wednesday June 29, 2022 4:43 am PDT by Sami Fathi
Fifteen years ago to this day, the iPhone, the revolutionary device presented to the world by the late Steve Jobs, officially went on sale. The first iPhone was announced by Steve Jobs on January 9, 2007, and went on sale on June 29, 2007. "An iPod, a phone, an internet mobile communicator... these are not three separate devices," Jobs famously said. "Today, Apple is going to reinvent the...
Read Full Article • 231 comments