The upcoming 27-inch iMac redesign will not feature a display with mini-LED but will instead keep the LCD panel previously used, according to industry sources cited today in a report from DigiTimes. 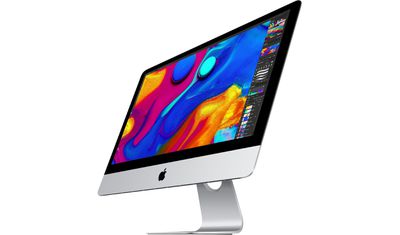 The report said that while "speculation about the next-generation 27-inch ‌iMac‌ coming with a miniLED display" has been circulating for some time, the new all-in-one desktop machine will, in fact, not feature a mini-LED panel, according to its sources.

DigiTimes' reporting goes at odds with credible display analyst Ross Young, who just as early as this month reaffirmed that the upcoming ‌iMac‌ will feature a mini-LED panel and support for ProMotion.

Despite its lack of a mini-LED panel, today's report claimed that the LCD display for the upcoming ‌iMac‌ is improving. "LED chips used in its display are up 30-40% from the previous models, giving it a higher brightness," the report said.

Initial rumors surrounding an update to the larger ‌iMac‌ indicated Apple increased the display size past 27-inches. Those rumors have died down, however, and we're now expecting the ‌iMac‌ to keep the 27-inch size but in a newer form factor. Today's report also claimed that like the 24-inch ‌iMac‌, released this past April, the upcoming 27-inch model will come in various colors.

The new 27-inch ‌iMac‌ is expected to be released in spring 2022, possibly at an event in March or April.

Smellmet
Can't say I'm bothered. The screen on the current 27 is excellent.
Score: 20 Votes (Like | Disagree)

No they didn’t. There were no credible rumors saying that. It was wild speculation.

It's an iMac, not an iMac Pro.

Which shouldn’t be a surprise. The machine it’s replacing costs $1799, not $4999 like the iMac Pro. I wonder when people will ever stop making up things and then getting upset when Apple doesn’t deliver what they made up.
Score: 17 Votes (Like | Disagree)

Onionring
DigiTimes has been wrong quite a few times before.
Score: 12 Votes (Like | Disagree)

FocusAndEarnIt
Why does MR report things from DigiTimes? Their track record is literally crap. Like, worse than Jon Prosser. And, FWIW, Ross has never been wrong yet. New displays with ProMotion and mini-LEDs follow the pattern Apple has clearly been charting with its pro devices.
Score: 8 Votes (Like | Disagree)

Tuesday March 8, 2022 11:08 am PST by Sami Fathi
Following the launch of the new Mac Studio and Studio Display, Apple has discontinued the 27-inch iMac. The 27-inch iMac had remained in the iMac line alongside the smaller 24-inch iMac with Apple silicon and was one of just a few Macs that still featured an Intel processor. Now with the 27-inch Studio Display that can be connected to any Mac, Apple has seemingly felt there is no need for ...
Read Full Article • 208 comments

Tuesday December 21, 2021 7:10 am PST by Joe Rossignol
Apple's suppliers have kicked off shipments for a new 27-inch iMac with a mini-LED display, according to a paywalled preview of a DigiTimes report. The shipments are said to be in limited quantities. No further details are available, but the report is likely referring to suppliers shipping individual components to larger manufacturers for final assembly as the new 27-inch iMac moves towards ...
Read Full Article • 170 comments