This week marks the 25th anniversary of Apple announcing that it had agreed to acquire NeXT for $400 million. The stunning move brought Steve Jobs back to Apple over a decade after he left the company following an internal power struggle. 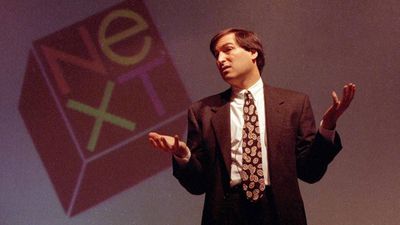 "The acquisition of NeXT is the start of a new chapter in Apple's history and represents a milestone in our transformation as a corporation," said former Apple CEO Gil Amelio, when the deal was announced December 20, 1996. "Today Apple welcomed back its most talented visionary Steve Jobs, someone who can inspire a new generation of customers and software developers and show that Apple remains the industry home for innovation and excitement."

A key reason Apple acquired NeXT was to gain access to its Unix-based NeXTSTEP operating system, which served as the foundation of Mac OS X.

"With this merger, the advanced software from NeXT will be married with Apple's very high-volume hardware platforms and marketing channels to create another breakthrough, leapfrogging existing platforms, and fueling Apple and the industry copy cats for the next ten years and beyond," said Jobs. "I still have very deep feelings for Apple, and it gives me great joy to play a role in architecting Apple's future."

Jobs initially returned to Apple as an advisor, making his first appearance at Macworld San Francisco in January 1997 to announce details of how Apple planned to incorporate NeXT technology into future releases of Mac OS. Jobs went on to replace Amelio as the company's interim CEO just nine months later, and he ended up dropping the interim title and remaining CEO until stepping down in August 2011 due to health issues.

Under the leadership of Jobs, Apple went from near bankruptcy to becoming the world's most valuable company, introducing iconic products like the iPod, iPhone, and iPad along the way. Without acquiring NeXT, Apple's fate may have been far different.

Steve Hayman, a longtime Apple and NeXT employee, reflected on the 25th anniversary of the two companies merging in a blog post earlier this week.

zoomp
I remember reading about this and feeling like it was the wrong move. BeOS seemed a better fit.

Realityck
The most important change for the good of Apple occurred. Unix-based NeXTSTEP became the basis of MacOS and Steve Jobs returned to steer the company back to being a technology marketplace leader.

I remember reading about this and feeling like it was the wrong move. BeOS seemed a better fit.

Apparently, I was wrong.

at the time, I would say BeOS would have been a great choice.

The problem with BeOS was that it did not come bundled with Steve Jobs 2.0
Score: 25 Votes (Like | Disagree)

JMacHack
I’m amazed at not only the fundamental way Jobs transformed Apple, but CEO culture as well.

It seems to me that it’s in vogue to be in the Jobsian mold. To be seen as a “visionary” rather than a bureaucrat. I think it’s safe to say that Jobs “made a dent in the universe.”

TheYayAreaLiving ?
Your legacy will live forever Steve! RIP. We miss you every day. You changed the WORLD! ?

daanodinot
One of the greatest decisions in the history of business.
Score: 18 Votes (Like | Disagree)
Read All Comments

Saturday February 4, 2023 10:05 am PST by Eric Slivka
Online retailer TigerDirect has slashed pricing on the M1 iPad Air in several colors, offering the base 64GB configuration for just $313.99 in Purple and Pink. Note: MacRumors is an affiliate partner with TigerDirect. When you click a link and make a purchase, we may receive a small payment, which helps us keep the site running. That's a savings of 48% compared to Apple's normal $599.00...
Read Full Article • 434 comments