The iPhone 13 lineup depreciates in value at almost half the rate of the Google Pixel 6, according to research by SellCell. 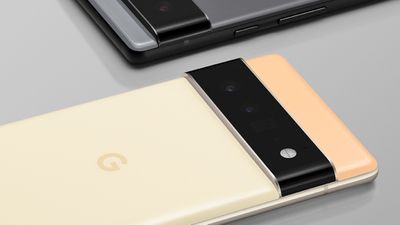 The Pixel 6, Google's latest flagship smartphone, launched just two months after Apple's ‌iPhone 13‌ lineup. Despite being touted as a leading Android competitor to the iPhone, the Pixel 6 suffers from considerably worse depreciation.

Looking at the most low-cost options in the respective lineups, the 128GB Pixel 6 lost the least value of all of the Google models with depreciation of 36.6 percent. This compares to depreciation of 26.9 percent for the 128GB ‌iPhone 13‌ mini, which is among the least popular ‌iPhone‌ models.

Last month, it was reported that the ‌iPhone 13‌ models were holding their value much better than any previous ‌iPhone‌ in the period after launch. Going into December, the ‌iPhone 13‌ has shown continued buoyancy with the lowest depreciation rate in the entire smartphone industry. That being said, the Pixel 6 is still early in its release and the coming months will present a clearer picture of the depreciation contrast between it and the ‌iPhone 13‌.

SellCell's research is based on data from 45 buyback vendors. See the full report for more detailed information.

TechRunner
That's no surprise to anyone who owns a Pixel. I'm on my second one, and by the time you've kept one over two years, even Google isn't interested in them for trade-in. That's one of the reasons I'm considering coming back to iPhone in the new year.
Score: 17 Votes (Like | Disagree)

deathcab
See. I told you all it was a good idea to roll your retirement savings over into iPhone 13s
Score: 13 Votes (Like | Disagree)

Shirasaki
Oh…ok…
Is there anything changed about smartphone depreciation that we didn’t already know 5 years ago?
Score: 13 Votes (Like | Disagree)

soomster
This article is sponsored by….
Score: 11 Votes (Like | Disagree)

adamjackson
This has always been the case. Try selling a 3 year old run of the mill Dell laptop and you can't give it away. Where a Mac will still get about 25% depreciation pear year.
Score: 10 Votes (Like | Disagree)

TheYayAreaLiving ?
Wow! Lots of research went into this. Good to know my iPhone won’t depreciate fast.
Score: 9 Votes (Like | Disagree)
Read All Comments