WhatsApp has launched a cryptocurrency payment feature for a small number of users in the United States, thanks to Novi integration, a digital wallet owned by Facebook (now Meta). 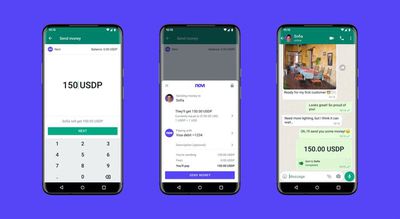 The pilot program lets users of the encrypted messaging app send and receive money "instantly, securely, and with no fees" using the Paxos Dollar (USPD) stablecoin, whose value is linked to the US dollar.

The way the payments work in WhatsApp is similar to sending regular attachments in a conversation. Users tap the plus (+) icon and then select Payment from the menu that appears. Users who are paid this way receive USDP, which can be withdrawn to a bank account in its equivalent value in US dollars.

There's no cap on the number of times the Novi system can be used to send and receive money through WhatsApp. Regardless of frequency of use, there are no fees associated with keeping a balance in a Novi account or withdrawing it to a bank account. In addition, the inclusion of Novi in the chat platform has no effect on the end-to-end encryption of personal messages.

There's a new way to try the @Novi digital wallet. Starting today, a limited number of people in the US will be able to send and receive money using Novi on @WhatsApp, making sending money to family and friends as easy as sending a message. 💸💬 pic.twitter.com/dGz3lejri7 — Stephane Kasriel (@skasriel) December 8, 2021

The small pilot program is available to some users in the US from today. For more information about the WhatsApp integration, check out the Novi website.

The pilot is one outcome of Meta's cryptocurrency plans, which have changed since they were officially announced in 2019. Back then, the plan was to develop a cryptocurrency called Libra that would be linked to a Facebook digital wallet called Calibra.

However, Libra has since become Diem, and Calibra has become Novi, and instead of using Diem, Novi has adopted the Paxos stablecoin in partnership with Coinbase, which is the custody partner that holds the funds for the pilot.

WhatsApp already offers payment systems in India and Brazil, but these used traditional fiat currencies rather than crypto.

i.am.lost
“However, Libra has since become Diem, and Calibra has become Novi, and instead of using Diem, Novi has adopted the Paxos stablecoin in partnership with Coinbase”

WhatsApp or any other app owned by Meta should not be considered secure / private / encrypted.
Score: 6 Votes (Like | Disagree)

TracerAnalog
Meta: give us all your data, and let us manage your money please. We promise* not to misuse* your, well actually, OUR data.

*Meta will be the judge of that.
Score: 4 Votes (Like | Disagree)

dynamojoe
No way in hell am I giving Meta (neé Facebook) any info about my crypto holdings. That's just not going to happen.
Score: 4 Votes (Like | Disagree)

Testing in the US seems logical, but I really bet it will be huge in other markets where WhatsApp has dominance. Especially if you can do transactions in the local currency or a tied, fixed equivalent

Forgive me if I have this wrong, but I was of the understanding that bank transfers between people aren't really a thing in the US, hence why there are so many apps like Venmo etc that facilitate sending money?

I can't see this being a hit elsewhere in the world where sending money to someone directly through bank transfer is just as easy, if not easier than the alternatives. If I pay for something like a meal using my bank card, I can instantly send a payment request to my friends for their share without extra steps or moving from one app to another.
Score: 2 Votes (Like | Disagree)

Thursday January 6, 2022 1:53 am PST by Tim Hardwick
WhatsApp is testing a helpful new feature on iOS that displays profile pictures in system notifications when users receive new messages from chats and groups. Image credit: WABetaInfo First spotted by app specialist WABetaInfo, the first new feature for the platform in 2022 uses APIs in iOS 15 to add the WhatsApp profile images to notifications in top-screen banners and in the Notification...
Read Full Article • 46 comments