Former Apple design chief Jony Ive is still working with Apple, he confirmed today in an interview with Vogue's Anna Wintour at the RE:WIRED event. Ive participated in a panel called "Designing for the Future We Want to Inhabit," where he spoke on topics like Steve Jobs, wearables, and LoveFrom. 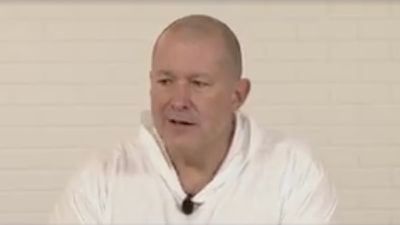 Ive confirmed that his LoveFrom design company is working with Apple, but he did not provide details on what specific projects he has done for the Cupertino company, nor did he outline if he has been involved with the development of new devices.

In addition to working with Apple, Ive's company has done work for Airbnb, Emerson Collective, Moncler, and Ferrari, among others.

Ive also spoke on the future of wearables, and he said that he expects wearable technology to continue to advance to the point where some devices are embedded in the body. "There's no doubt... that some of these products will disappear beneath our skin," he said. "I can't think of anything more personal, more specific, more individual, and more intimate than things being inside us."

Ive said that the iPod was, essentially, Apple's first piece of wearable technology, in a discussion about the recent 20th anniversary of the device. "I think what the iPod really marked was the beginning of creating far more specific products and devices," he said.

Steve Jobs often comes up in Ive's interviews, and today's panel was no exception. Ive said that he remembers Jobs for his drive and his values. "There was this relish, this celebration of being surprised," said Ive. "Even if the surprise actually meant that he was wrong. He was far more interested in the learning than in being right."

According to Ive, some of his memories of his most productive times with Jobs were when the two were just walking together and thinking close to one another. "Almost always, in my experience, the most powerful ideas occur quietly, and they are fragile," he said.

Ive's full discussion with Anna Wintour can be watched on WIRED's website.

MallardDuck
"I can't think of anything more personal, more specific, more individual, and more intimate than things being inside us."

I can't think of anything more intrusive, more creepy, more big brother, more loss of privacy and person than things being inside us.

But at least it'll be thin and light.
Score: 41 Votes (Like | Disagree)

TheYayAreaLiving ?
Ahhh, folks, it looks like the notch isn’t going away anytime soon.

Naraxus
What a complete blowhard. If he thinks people are going to willingly embed **** in their bodies he's ****ing insane
Score: 12 Votes (Like | Disagree)

TheMacDaddy1
Please do NOT come back to Apple.

Loving my 16inch M1 Pro, with all the ports, Magsafe, great keyboard and no Touchbar.

TheYayAreaLiving ?
Also, Jony Ive: Can you please tell me what am I looking at in your website. I don’t see anything. It's nothing but text there. Is this some sort of a trick?

Wednesday October 20, 2021 11:06 am PDT by Joe Rossignol
Apple's product design has improved since former design chief Jony Ive left the company in 2019, according to an opinion column by Bloomberg reporter Alex Webb. Webb believes that Apple has reemphasized function over form since Ive's departure. For example, while the design of the previous Siri Remote for the Apple TV made it easy to pick up the remote upside down by accident, a new Siri...
Read Full Article • 338 comments

Tuesday October 12, 2021 1:51 am PDT by Tim Hardwick
LoveFrom, the design firm co-founded in 2019 by Apple's former design chief Jony Ive and fellow designer Marc Newson, this week unveiled its official website, LoveFrom.com. The site reveals for the first time LoveFrom's visual identity, which was designed by Ive and other members of the "creative collective," including English art director Peter Saville, and Chris Wilson and Antonio...
Read Full Article • 175 comments