Reports suggest that despite the new 14-inch and 16-inch MacBook Pros sharing the same mini-LED display technology as the 12.9-inch iPad Pro, the new Mac computers are not obviously suffering "blooming," a phenomenon found on the ‌iPad Pro‌. 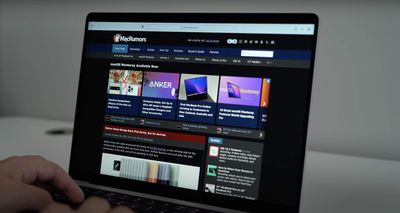 Unlike traditional displays, which control individual pixels, displays with dimming zones control separate zones rather than individual pixels. If one dimming zone is lit up, artifacts from it may be noticeable in neighboring zones with a black background, leading to "blooming," as shown below on the 12.9-inch ‌iPad Pro‌.

Blooming is typically only noticeable when viewing black content or text and when viewed from the side. Apple has in the past addressed the phenomenon by saying the ‌‌iPad Pro‌‌'s display is designed to minimize its visibility. Given that the new MacBook Pros announced last week include the same mini-LED technology, some have been concerned about whether the new MacBooks will face the same issue.

According to users' reports and reviews, that doesn't seem to be the case. Brian Tong noted in his review of the new M1 Max 16-inch MacBook Pro that while blooming is still present on the new displays, it's only visible with "deep black backgrounds, and bright white text or a white logo is contrasting it." Additionally, Tong stressed that the blooming effect is exaggerated when recorded with a camera and that it's much less obvious when viewed with the naked eye.

New owners of the 14-inch and 16-inch MacBook Pro are also sharing their thoughts on the MacRumors Forums. Compared to the 12.9-inch ‌iPad Pro‌, the new MacBook Pro makes better use of mini-LED and dimming zones. As one forum user wrote:

Overall I think the IPP 12.9 display is awesome but the XDR on the mbp is even better because when I play HDR content only the window portion is super bright - on the iPad everything just looks bright. You're not going to get gimped here on the display of the new mbp. well maybe the ghosting issue is annoying for some overall it is a fantastic display.

Another user shares the same thoughts, saying that despite the small instances of blooming, the new MacBook Pro displays are "fantastic."

Comparing the 12.9" iPad Pro and the new 16" MacBook Pro, the MacBook Pro is a bit better. Much less blooming, and the colors pop a bit more. That being said they are both amazing screens. When I first used the iPad I was really impressed by the screen. When I first used the MacBook Pro I was completely blown away. As a test I played a 4K HDR demo and the peak brightness, colors, and the realism is one of the best I have seen on any screen (not counting extremely high end TVs).

Michael Kukielka, also known as DetroitBORG, noted on Twitter that blooming on the new MacBook Pros is almost "imperceptible" compared to the 12.9-inch ‌iPad Pro‌.

The Liquid Retina XDR display on the new MacBook Pros includes several new features, including higher sustained brightness for HDR content and ProMotion, allowing for a variable refresh rate of up to 120Hz. The 12.9-inch ‌iPad Pro‌ includes 2,500 dimming zones, and while it's not entirely clear how many zones are in the 14-inch and 16-inch MacBook Pros respectively, it seems that Apple has improved its display technology with its new high-end Mac computers.
Related Roundup: 14 & 16" MacBook Pro
Buyer's Guide: 14" & 16" MacBook Pro (Buy Now)
Related Forum: MacBook Pro
[ 97 comments ]

MrGimper
That iPad picture is such a misrepresentation of what the blooming is actually like on the iPad.
Score: 17 Votes (Like | Disagree)

No not really, I returned my ipad precisely because of this

Unlike traditional displays, which control individual pixels, displays with dimming zones control separate zones rather than individual pixels. If one dimming zone is lit up, artifacts from it may be noticeable in neighboring zones with a black background, leading to "blooming," as shown below on the 12.9-inch iPad Pro

I would say 'traditional displays' don't have dimming zones, instead using a constant backlight across the whole display. Not quite right to say they control individual pixels unless you're referring to OLED.
Score: 11 Votes (Like | Disagree)

bp1000
What do people expect with mini zoned LED technology. The moon on a stick? This isn't OLED.
Score: 8 Votes (Like | Disagree)

Sandstorm
Very happy to see this. It's been a long, long time since I've been so excited about a new Mac product.
Score: 7 Votes (Like | Disagree)

krspkbl
"not an issue" here doesn't mean it's not an issue. it's more like "I don't care" or "I'm ignoring it because I refuse to say anything negative about my Apple toy". it looks fine in some content but on text/dark backgrounds it's definitely noticeable. Mini LED is good for TVs but shouldn't be in anything like an iPad/Laptop.

yeah sure it's better than a standard LCD but let's not kid ourselves on here: Mini LED is a stop gap technology. Apple will eventually move to OLED and then Micro LED. OLED is by far the superior technology when compared to Mini LED but of course it has it's own flaw which is a risk of burn in. I'll take the the risk it MIGHT happen after a couple years over having to deal with annoying blooming every time you look at the display as soon as it's out the box.

Micro LED is the true end goal. the LEDs will be so small they will be able to light up individual pixels instead of tens or hundreds of pixels with Mini LED. if there's any blooming with Micro LED it might spill over to the next pixel but you'll never notice that unless you put it under a microscope. of course Micro LED won't be at risk of burn in like OLED.

as long as Apple is using Mini LED i'm not touching their products. these MacBook Pros and even the iPad Pro should've came with an OLED display as it's currently the best tech available.
Score: 6 Votes (Like | Disagree)
Read All Comments

Tuesday October 26, 2021 1:00 pm PDT by Juli Clover
It's officially MacBook Pro launch day, and customers around the world who pre-ordered after last Monday's event are receiving their devices today. We've already seen reviews of the new MacBook Pro models from media sites, but now first impressions from everyday users are available. New 14 and 16-inch MacBook Pro owners are sharing their opinions on the MacRumors forums and Reddit, and their ...
Read Full Article • 210 comments