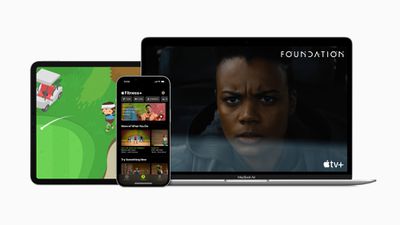 "That's up 160 million year on year, which is up five times in five years," said Cook. "So it's been quite the growth cycle."

Apple's financial chief Luca Maestri said the company set September quarter revenue records across each of its services, and he said Apple's active installed base of all devices reached a new all-time high across all of its geographic segments.

Earlier this week, Apple announced that Apple Fitness+ subscribers can now use SharePlay to start a group workout or meditation with their friends while on a FaceTime call. Apple Fitness+ is also expanding to 15 more countries on November 3.

How does AppleCare+ classify as a service?

What else does it classify as? It's not a good. It's a service.
Score: 6 Votes (Like | Disagree)

.....
you seriously think they are keeping their margins lower because they are making money elsewhere?
when has there ever been evidence of that?
Score: 3 Votes (Like | Disagree)

Edit: this should read: "Services profit and margins help Apple's overall margins remain in the historical 40% range while allowing Apple to have lower hardware margins."
Score: 2 Votes (Like | Disagree)

Apple always strives to keep prices as low as possible for customers, while also maintaining margins high enough to continue investing in building the best-of-breed products and services we all love. It's a win-win for everyone.
Score: 1 Votes (Like | Disagree)

What else does it classify as? It's not a good. It's a service.

Shows how much you know. Check out my AppleCare+ unboxing video on YouTube.
Score: 1 Votes (Like | Disagree)

This helps Apple diversify their income sources to increase their value and keep stockholders happy.
Score: 1 Votes (Like | Disagree)
Read All Comments