Ahead of the 2021 United Nations Climate Change Conference, also known as COP26, Apple today announced that it is adding 10 new projects for its "Power for Impact" initiative, which looks to bring clean energy solutions to communities around the world, and has more than doubled the number of its suppliers committed to using 100 percent clean energy over the past year. 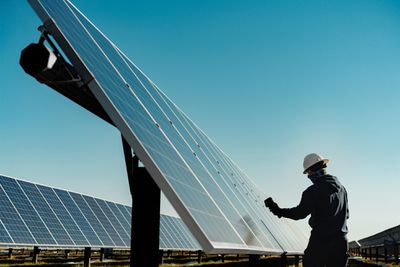 Apple announced its Power for Impact initiative in 2019, designed to provide communities with renewable energy while promoting economic and social growth. One of the 10 new Power for Impact projects involves working with the Oceti Sakowin Power Authority in the United States to collaboratively develop renewable energy resources for the wholesale market, with the objective of creating a large-scale wind power development in the Midwest. Apple CEO Tim Cook said:

Every company should be a part of the fight against climate change, and together with our suppliers and local communities, we're demonstrating all of the opportunity and equity green innovation can bring. We're acting with urgency, and we're acting together. But time is not a renewable resource, and we must act quickly to invest in a greener and more equitable future.

Other projects in South Africa, Nigeria, the Philippines, Thailand, Vietnam, Colombia, and Israel seek to provide renewable energy to healthcare and educational institutions, as well as surrounding households, using rooftop solar installations. Apple believes that this will create a source of local revenue and lower energy costs, freeing up funds for educational scholarships, equipment, and medication.

Apple added that 175 of its suppliers have now committed to using renewable energy. This includes 19 suppliers in the United States, 19 in Europe, 50 in China, and 31 in India, Japan, and South Korea. The company said that the suppliers are also scaling up their use of renewable energy across their operations, beyond their business with Apple alone. Apple and its suppliers will bring more than nine gigawatts on-grid around the world, avoiding over 18 million metric tons of CO2 emissions annually, the equivalent of taking over four million cars off of the road each year.

Apple has also expanded the amount of recycled material that it uses in its products, working with suppliers to move toward a "circular system" that attempts to reduce the need for carbon-intensive mining. This includes recycled sources of gold, cobalt, aluminum, rare earth elements, and more.

The efforts are part of Apple's goal to reach carbon neutrality across its business by 2030, meaning that every Apple device sold will have a net-zero climate impact. Apple has already reduced its carbon emissions by 40 percent over the past five years.

Hammerd
Sadly it’s all bluff to make us forget how their products are disposable
Score: 15 Votes (Like | Disagree)

The more everyone can do to reduce carbon emissions the better and no other company has the resources to create these projects than Apple
Score: 14 Votes (Like | Disagree)

TroyBoy30
you cant stop climate change. you are not god
Score: 10 Votes (Like | Disagree)

Great. Solar panels actually cause more toxic pollution at the end of their lifecycle.

Really? Did you get that information from Tic Tok or was it Instagram? Or was it a definitive source of a think tank funded by the fossil fuel industry? I'm curious when you think the end of a solar panels lifecycle is. Or what you think is going to be so toxic about them at that point.
Score: 10 Votes (Like | Disagree)

14UG
I totally understand the cynicism towards a company like Apple's efforts towards sustainability. But the fact is, it doesn't matter if this is sincere and freely offered or green-washing only when the company's hand is forced (in truth it's probably both in different parts). What matters is that Apple's efforts are multi-faceted and exceed, in large part, what other tech companies are doing.

Apple are still not doing enough but they are doing better than many. Leading the way with a dim light.
Score: 8 Votes (Like | Disagree)

BlakeSchneider
Great. Solar panels actually cause more toxic pollution at the end of their lifecycle.
Score: 8 Votes (Like | Disagree)
Read All Comments

Thursday April 1, 2021 12:18 am PDT by Sami Fathi
Apple plans to use Tesla's "Megapack" battery pack at a newly announced energy farm in California to help power Apple Park and further its commitment to renewable energy and being carbon-neutral by 2030, according to The Verge. Apple's newly announced California solar farm will use 85 of Tesla's 60MV battery packs to help power Apple Park, according to the report. According to Apple, the new ...
Read Full Article • 93 comments

Friday May 20, 2022 12:18 pm PDT by Juli Clover
Sony this week came out with an updated version of its popular over-ear noise canceling headphones, so we picked up a pair to compare them to the AirPods Max to see which headphones are better and whether it's worth buying the $400 WH-1000XM5 from Sony over Apple's $549 AirPods Max. Subscribe to the MacRumors YouTube channel for more videos. First of all, the AirPods Max win out when it comes ...
Read Full Article • 176 comments