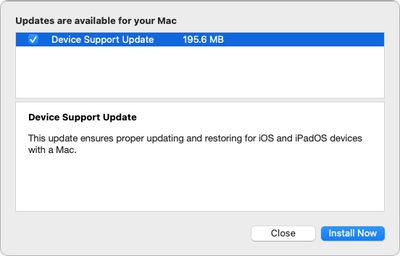 While no other details were provided, it was assumed that the update added support for recently released devices, including iPhone 13 models, the new iPad mini, and the ninth-generation iPad. Still, the update was the first of its kind to come through System Preferences -> Software Update, which made some users curious about it.

Usually when you connect an iPhone, ‌iPad‌, or iPod touch to a Mac, a dialog pops up from an app called MobileDeviceUpdater that says "A software update is required to connect" to your iOS device. This normally happens when the device has been independently updated with a newer version of iOS or iPadOS that the Mac doesn't recognize, indicating that the download is required for your Mac to communicate with the device.

It looks as if Apple has now chosen to reduce the reliance on MobileDeviceUpdater by automatically delivering these downloads when they are ready via Software Update, so users no longer have to wait until they plug in an iOS device to get what is now referred to as a "Device Support Update." The change is likely an effort to reduce the frequency of the MobileDeviceUpdater dialog popping up upon connecting a device, which may strike some users as some sort of malware.

The change was helpfully confirmed by Tidbits' Adam Engst, who sat on the mysterious Device Support Update for a week or two to verify what it was.

I got that chance today when I plugged in my iPad Pro and got the usual MobileDeviceUpdater dialog. I made sure that Software Update was still offering me Device Support Update, and then I allowed the MobileDeviceUpdater dialog to update my Mac. After closing and reopening Software Update, the Device Support Update option was gone, confirming that they're one and the same.

As Engst notes, this isn't an earth-shattering discovery, but it's good to know what happens when installing future Device Support Updates from Software Update: They don't require a reboot, and users will still get a MobileDeviceUpdate dialog the next time they plug in their device if they haven't got around to installing the update.

TheYayAreaLiving ?
Nice! This can come in handy.
Score: 7 Votes (Like | Disagree)

bobnugget
Not just Big Sur - also got this on Mojave, which appears to be out of support otherwise.
Score: 4 Votes (Like | Disagree)

Macropanda
Maybe they can now concentrate on getting the entire Sync function to work correctly like it did Pre Feb 2020.
Score: 4 Votes (Like | Disagree)

ghanwani
Didn't know there were folks that still plug in their iPhones and iPads into their Macs for anything but charging.
Score: 3 Votes (Like | Disagree)

svish
Good to know about the change in update method
Score: 1 Votes (Like | Disagree)

Shirasaki
Wonder how far back Monterey can support devices now. First generation iPhone? iPod classic?
Also it seems syncing from iTunes to music app doesn’t pop up “you can only sync with one library“ option anymore.
Score: 1 Votes (Like | Disagree)
Read All Comments

Saturday May 21, 2022 9:00 am PDT by Hartley Charlton
With around four months to go before Apple is expected to unveil the iPhone 14 lineup, the overwhelming majority of rumors related to the new devices so far have focused on the iPhone 14 Pro, rather than the standard iPhone 14 – leading to questions about how different the iPhone 14 will actually be from its predecessor, the iPhone 13. The iPhone 14 Pro and iPhone 14 Pro Max are expected...
Read Full Article • 323 comments