Apple at its "Unleashed" event today announced the M1 Pro and M1 Max processors, two custom-built successor chips to the original M1 Apple silicon chip. The new MacBook Pros are powered by the new chips, which deliver up to 70% faster CPU performance than the ‌M1‌. 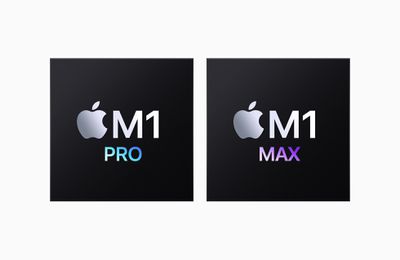 The ‌M1 Pro‌ features up to 10 CPU cores, with eight high-performance and two energy-efficient cores. In terms of graphics, the ‌M1 Pro‌ has a 16-core GPU, which is up to twice as powerful as the ‌M1‌. It has up to 200GB/s of memory bandwidth, using 33.7 billion transistors, and supports up to 32GB of unified memory.

The ‌M1 Max‌ builds on the ‌M1 Pro‌ and starts by doubling the memory interface, delivering up to 400 GB/s memory bandwidth, and supports up to 64GB of unified memory with 57 billion transistors. It has the same 10-core CPU, but a 32-core GPU that's up to seven times faster, and is similar performance to discrete graphics while using 70% less power.

"M1 has transformed our most popular systems with incredible performance, custom technologies, and industry-leading power efficiency. No one has ever applied a system-on-a-chip design to a pro system until today with M1 Pro and M1 Max," said Johny Srouji, Apple's senior vice president of Hardware Technologies. "With massive gains in CPU and GPU performance, up to six times the memory bandwidth, a new media engine with ProRes accelerators, and other advanced technologies, M1 Pro and M1 Max take Apple silicon even further, and are unlike anything else in a pro notebook."

The efficient architecture of ‌M1 Pro‌ and ‌M1 Max‌ means they deliver the same level of performance whether MacBook Pro is plugged in or using the battery, says Apple. The ‌M1 Pro‌ and ‌M1 Max‌ also feature enhanced media engines with dedicated ProRes accelerators specifically for pro video processing.

There’s ALWAYS gotta be that one person that just has to complain about something, anything…no matter what
Score: 23 Votes (Like | Disagree)

CWallace
Who cares what it is called?

Those asking for a "serious" Apple Silicon SoC should hopefully be happy with the specs.

eicca
Oh baby. Put that Max chip in the Mini and I'll be selling what's left of my soul, yes I will.
Score: 10 Votes (Like | Disagree)
Read All Comments