Apple on Tuesday released firmware version 4A400 for the second-generation AirPods, AirPods Pro, and AirPods Max. On the AirPods Pro, the update enables a new Conversation Boost feature that Apple previewed at WWDC earlier this year. 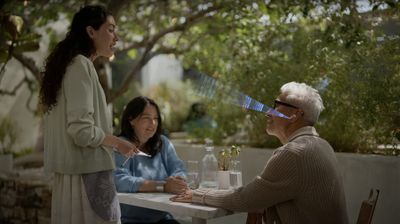 Apple says Conversation Boost is designed to help people with mild hearing challenges stay more connected in conversations. The feature uses the AirPods Pro's beam-forming microphones to boost the volume of a person talking in front of you, making it easier to listen to a face-to-face conversation, and there is also an option to reduce ambient noise.

How to Turn On Conversation Boost

You can check your ‌‌‌AirPods Pro‌‌‌ firmware by following these steps:

Once the AirPods Pro are updated, Conversation Boost can be turned on by following these steps on an iPhone or iPad running iOS 15 or iPadOS 15:

The new firmware also adds Find My network integration for the AirPods Pro and AirPods Max.

You read my mind.

maxfromdenmark
Cool! But I’m still trying to upgrade firmware and nothing happens.
Score: 15 Votes (Like | Disagree)

There was that article yesterday about banks being worried about Apple as they took over music players, GPS devices and cameras. Now hearing aid manufacturers are on notice!

I wonder what the price comparison between a hearing aid and AirPods is?

I wear hearing aids. I am completely deaf in my right ear and halfway deaf in my left. I wear a BiCros system that allows the hearing aid in my right ear to act like a receiver and transmits sounds that come from that side over to my left side, so I'm not always turning my head. I got this system a little over 2 years ago and it cost me nearly $3,800. I don't know what I would do without my hearing aids. I doubt the AirPods would be strong enough for what I would need, though. I love that the AirPods have this capability for those with mild hearing loss.
Score: 11 Votes (Like | Disagree)

There was that article yesterday about banks being worried about Apple as they took over music players, GPS devices and cameras. Now hearing aid manufacturers are on notice!

I wonder what the price comparison between a hearing aid and AirPods is?

Hearing aids are extremely expensive and not covered by most insurance (including Medicare). They are prohibitively expensive for many people.
Score: 10 Votes (Like | Disagree)