Apple now lets users rate and review pre-installed iPhone apps on the App Store, such as Maps, Podcasts, Mail, and others, bringing the company's apps to parity with how users criticize and/or laud third-party apps on the platform. 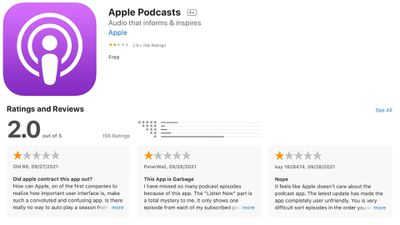 Spotted first by 9to5Mac, Apple now lets users leave a zero to five-star rating for a number of its pre-installed apps, further enabling users to write their reviews. At the time of writing, the Podcasts app, which has faced a flurry of criticism, has a 2 out of 5-star rating out of 156 reviews, with other Apple apps varying.

Presently, no Apple app has a perfect five-star rating, with even the company's built-in Stocks app struggling to reach a 4 out of 5 grade. Notes has earned just 3.6 out of 5, while even Maps, which has received more attention from Apple over the years, has only a 3 out of 5 ratings.

By opening up its apps to ratings and reviews, Apple and its teams are now better able to receive more direct feedback for individual apps on ‌‌iPhone‌‌ and iPad. In light of recent ‌App Store‌ litigation, this move also nixes a potential criticism from Apple's detractors, who could have previously argued that by withholding ratings and reviews for pre-installed apps, Apple was being anti-competitive.

Apple's pre-installed apps, such as Mail, Podcasts, and Maps, don't receive regular ‌App Store‌ feature updates as other apps do; instead, their major updates are bundled with significant iOS releases.

Apple refines and tweaks all of its apps with each minor update for iOS and iPadOS, but significant changes, such as the ones that are likely to be requested through ratings and reviews, are not expected to come sporadically throughout the year, but instead, users will have to wait for the next major iOS release to see if their wishes have come true.

Shirasaki
Finally something users can pour their frustration and anger towards apple to, and it would be public.

Hope this will tear Apple’s “WE ARE THE BEST” tinfoil hat a little bit and face the reality.
Score: 24 Votes (Like | Disagree)

Reason077
Those 1-star reviews on the Podcasts app seem a little unfair to me.

Yes, the UI could use some improvement. I particularly don't like how deeply it buries some commonly used (by me) features, like "recently played".

But, compared to the BBC's awful "BBC Sounds" app, which seems to go out of its way to make it hard for you to find content you're looking for (or even any good new relevant content), the Apple Podcasts app is a discovery dream!
Score: 18 Votes (Like | Disagree)

djcerla
Good idea, it will be interesting to see how ratings fare over time.

I’ve just rated Maps 5 stars out of 5. It’s leaps and bounds better than Google in my area and I prefer its user interface.
Score: 10 Votes (Like | Disagree)

fakeycakemaker
Ere Apple, can we rate and review iOS updates too please?…..
Score: 10 Votes (Like | Disagree)
Read All Comments