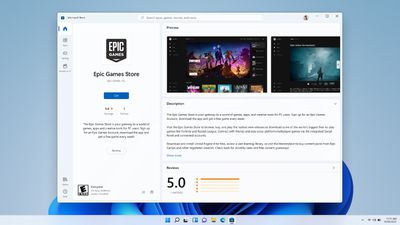 As a reason for the change, Microsoft said that it wants to ensure that its "business terms are fair" and also to "help promote innovation."

Our commitment to being an 'open Store for an open platform' isn't just about the various technical underpinnings of how apps are built. It's also about making sure our business terms are fair and help promote innovation. For instance, the Microsoft Store on Windows no longer requires app developers to share revenue with Microsoft, when apps manage their own in-app payment systems.

Two major Apple competitors, Google and Microsoft, now support alternate app installation options on their platforms, something that could potentially sway regulators working on antitrust legislation in the United States and other countries.

‌Epic Games‌ was not successful in its efforts to convince the court that Apple needs to be forced to allow alternate app stores, and ‌Epic Games‌ is now appealing the ruling in the Epic v. Apple lawsuit. There was one win to come out of the dispute, though, with the judge ruling that Apple must allow developers to offer a button or a link to their websites where non-in-app purchase payment options are available.

Microsoft has been involved in the ongoing antitrust investigations that Apple and Google are facing in the United States, but not on the side of the tech companies. Microsoft president Brad Smith said in June that it's time for regulators to investigate App Stores.

Back in 1999, Microsoft lost an antitrust case and was accused of maintaining a monopoly in the PC market. Microsoft was forced to submit to oversight and was required to share its APIs with third-party companies.

Quu
Can't wait for them to add the same stores on the XBOX. Oh they won't be doing it on there? weird.

Maybe it's because no one uses the Windows Store on PC so they don't care about it.
Score: 45 Votes (Like | Disagree)

jimbobb24
This is clever way to stick it to Apple and Google. Microsoft probably not making a ton on their App Store and it’s not integral to their strategy. So this makes them look open and accommodating while isolating Apple and Google for attacks by competitors and politicians.
Score: 27 Votes (Like | Disagree)

Microsoft proved years ago that you can make a secure OS without having to lock down the application distribution model. All Apple does is try to keep their cash cow making money.

I would call Windows many things. Secure is not one of them
Score: 21 Votes (Like | Disagree)

This is clever way to stick it to Apple and Google. Microsoft probably not making a ton on their App Store and it’s not integral to their strategy. So this makes them look open and accommodating while isolating Apple and Google for attacks by competitors and politicians.

This is correct. People don't use the MS Store to make purchases nearly as often as they do on iOS and Android.

If it did, Microsoft would have never done this.

This is Microsoft saying, "See, we're fair. Please don't investigate our anticompetitive practices in Office/Teams/Enterprise. Go after Apple and Google. They're the bad guys."
Score: 18 Votes (Like | Disagree)

leman
This is a funny PR stunt. Of course, Epic game store is already available on Windows (you just have to download their app from the epic website). By integrating alternative stores into their Windows store, Microsoft is a) drawing attention to their own store and b) opens up a possibility to block free software installs in the future.

P.S. And of course, Epic game store is also available on macOS.
Score: 13 Votes (Like | Disagree)