It's iPhone 13 launch day, and customers around the world are receiving their ‌iPhone 13‌, 13 mini, 13 Pro, and 13 Pro Max orders, plus the new devices are also in Apple retail locations. We picked up one of the new ‌iPhone 13‌ models and both of the iPhone 13 Pro models for a quick unboxing and an honest overview of the feature set.

Subscribe to the MacRumors YouTube channel for more videos.
Apple's ‌iPhone 13‌ models have more environmentally friendly packaging, so you just need to pop open the box and your iPhone is right there with no more protective plastic. There are a few papers, a SIM ejection tool, and a Lightning to USB-C cable. No charger or EarPods, of course, because Apple dropped those last year. 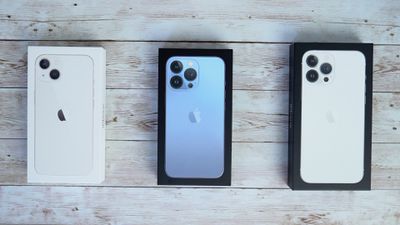 The ‌iPhone 13‌ models are heavier than the iPhone 12 models, and it's definitely noticeable with the Pro Max. We have the Silver ‌iPhone 13 Pro‌ Max, and the Sierra Blue ‌iPhone 13 Pro‌, which is a much lighter blue than last year.

As for the ‌iPhone 13‌, we have the Starlight color, which is meant to be a silver/gold hybrid, and on the ‌iPhone‌, it's nearly white. It's quite attractive. Unsurprisingly, the camera bumps are massive, and the notch is smaller, a feature that's mostly obvious when putting the ‌iPhone 13‌ next to an ‌iPhone 12‌.

Aside from the notch tweak and the camera bumps, the ‌iPhone 13‌ design is on the boring side because it's basically identical to the ‌iPhone 12‌ design.

The ‌iPhone 13 Pro‌ models have a ProMotion display, and that's definitely a noticeable improvement. Scrolling is super smooth, and it looks great. ProMotion will definitely be the standout feature for people who pick a Pro model.

There are new camera capabilities, including a Macro mode. It's fun to play around with, but will have limited use in the real world. As other reviews have pointed out, there's an irritating quirk with macro mode -- if you get too close to the subject, the camera switches to another lens, and you have to reset the shot to get back to macro mode.

Apple added a new Cinematic Mode, which is more or less Portrait Mode for video. It works okay, but it's a little bit buggy and it's not super fantastic. You're also getting Photographic Styles, which apply filters to just part of your image, which is kind of useful.

Make sure to check out our video to see all the camera features in action, and we'll have more in-depth camera coverage coming up next week.

Battery life should be significantly improved based on what Apple has boasted for the new iPhones, but we'll need some more time to test that out. In a nutshell, these are basically ‌iPhone 12‌ models with a few new bells and whistles. There's nothing earth shattering here, so you don't need to upgrade if you've already got one an ‌iPhone 12‌ or 12 Pro, but there are some solid features for those coming from an older device.

Let us know what you think of the new ‌iPhone 13‌ models in the comments.

Adamhwi
If you want less than honest reviews, check out Apple’s fav iJustine. I’m pretty sure she’d be able to hype-up Tim’s turds if he let her.
“Look, there’s some corn… no freakin’ way! Look how amazing it looks with the new macro lens!”
Score: 49 Votes (Like | Disagree)

There are new camera capabilities, including a Macro mode. It's fun to play around with, but will have limited use in the real world.

Ok, I guess we have different real worlds :)
Score: 29 Votes (Like | Disagree)

jayducharme
I picked up my 13 mini this morning. There were only 7 people in line about a half-hour before the Apple Store opened, and I was number 4. I was ushered into the store right when it opened and got my phone within a few minutes. When I left the store, no one was in line. So although others apparently aren't excited about this release, I'm quite happy. My new mini has a bigger battery, smaller notch, better camera and better cellular radio. If it turns out to be true that Apple will be discontinuing the mini, this iPhone will have to tide me over for quite a while. If they do continue making the mini, the 13 should still last me for quite a while.
Score: 19 Votes (Like | Disagree)

If you want less than honest reviews, check out Apple’s fav iJustine. I’m pretty sure she’d be able to hype-up Tim’s turds if he let her.
“Look, there’s some corn… no freakin’ way! Look how amazing it looks with the new macro lens!”

Ive said it a million times. iJustine and all of those like her are not reviewers, they are advertisers. They advertise for apple and then apple throws them crumbs like a 10 minute Cook interview.
Score: 17 Votes (Like | Disagree)
Read All Comments