In an updated support document, Apple has indicated that a permission-related error when using a scanner on a Mac has been fixed as of macOS 11.6. 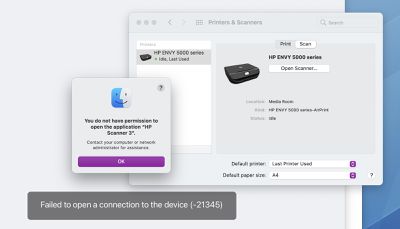 When attempting to use a scanner with a Mac, Apple said users might have received an error message indicating they did not have permission to open the application. The error message said to contact a computer or network administrator for assistance, or indicated that the Mac failed to open a connection to the device.

Users may have encountered the error in the Image Capture app, Preview app, or the Printers & Scanners section of System Preferences, according to Apple.

For users who elect not to update to macOS 11.6 at this time, Apple previously shared step-by-step instructions on how to temporarily resolve the issue:

The issue has presumably also been fixed in the latest macOS Monterey beta.

Because maybe they just found out about it?

You're not making any sense... this was acknowledged that it was a bug by Apple prior to 11.6, they said it will be fixed in a future release, and then they released 11.6 with no release notes other then the standard 'bug fixes and general enhancements' boilerplate message they always use. Do you think it was just magically fixed in 11.6 and they don't QA their work and then were amazed when they randomly found out it was fixed?
Score: 4 Votes (Like | Disagree)

CheesePuff
This is why Apple should include actual release notes in updates. Not to find out weeks later through a support doc.
Score: 4 Votes (Like | Disagree)

jefhai
A lot of printers flat out don’t work on Arm Macs
Score: 3 Votes (Like | Disagree)

Lol you have zero clue how software development works then.

And I've been a programmer for over 40 years.

I've only peripherally read this thread, but can say that scanners have always been a PITA with macs. I've always had HP scanners, and my history started with the hideously expensive flat bed scanner I owned. Eventually Apple/HP just stopped even trying to pretend they supported it. The next scanner I bought was a very beautiful standup scanner, all glass, and amazing, and it lasted a year or so, then another scanner, *POOP* stopped working with every update, and took either major gyrations or waiting for software support many times. Then I got an expensive 'all-in-one', and it had features dripping off of it, and most of them don't/won't work, and the same fun started with updates and it not working. Now, it works on mine, but refuses to scan on the wife's. (She actually thinks it works for me because it's afraid of what will happen to it if it fails. SCRAPPED)

I haven't had many printers fail to work after an update, but had a client that had to reload all their drivers, and I have had to reset the printer software system on a mac at least a few times back in the day.

So Apple has a problem with testing their updates. Apple has a problem with their contracted (most likely) programmers breaking things that worked previously. Apple is guilty of a lot of things, and attention to detail in testing 'their' software and updates is the biggest one in my mind. So permission errors in trying to scan makes me laugh. Apple appears to be unable to learn from their massive wake of screw ups in previous versions of macOS.

So how that makes me ignorant on 'how software development works' is kind of a reach, isn't it?

Is it only fixed for HP scanners? HP printers have been having this error ever since Big Sur with no resolution!

No it was doing it with my Epson printer...
Score: 1 Votes (Like | Disagree)
Read All Comments