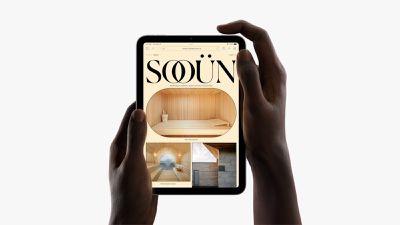 The new ‌iPad mini‌ features a completely new design, dismissing the Home Button in favor of a full-screen design with an 8.3-inch display. The display features wide color, an antireflective coating, 500 nits of brightness, and True Tone. Featuring an A15 Bionic chip, the new ‌iPad mini‌ is up to 40% faster in CPU performance compared to the previous generation, with an even bigger 80% increase in GPU power.

iPad mini gets a huge performance boost from the new A15 Bionic chip, with its incredibly efficient design that delivers all-day battery life.1 The 6-core CPU delivers a 40 percent jump in performance, and the 5-core GPU delivers an 80 percent leap in graphics performance compared to the previous generation of iPad mini. A15 Bionic on iPad mini handles even the most demanding tasks — from graphically rich games to pro apps used by designers, pilots, doctors, and more. With its powerful performance and compact design, iPad mini is the ultimate tool users can take anywhere.

For the first time for ‌iPad mini‌, the new iPad features 5G technology, offering customers even faster performance, with download speeds of up to 3.5Gbps. Even with 5G, Apple says the new ‌iPad mini‌ still features "all-day battery life."

_Spinn_
The mini is better than the iPad they just announced.
Score: 34 Votes (Like | Disagree)

Haha what was it supposed to be?? That is literally what it is called.
Score: 25 Votes (Like | Disagree)

Truefan31
It’s kind of ridiculous now if Touch ID isn’t in the power button of the iPhone at least........
Score: 19 Votes (Like | Disagree)

mcbumbersnazzle
$500 lmao. what a joke. Remember when apple just do product improvement at the same price instead of charging significantly more for each improvement they made?
Score: 17 Votes (Like | Disagree)

Saturn1217
I LOVE how usb-c was touted as a huge improvement for iPad mini but it's somehow not good enough for the iPhone...