Apple today seeded the release candidate version of the upcoming watchOS 8 update to developers for testing purposes, with the update coming one week after Apple released the eighth watchOS 8 beta. 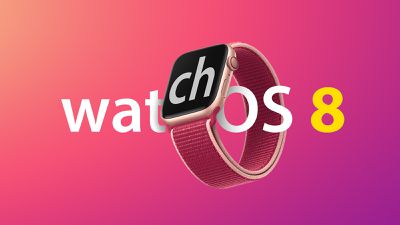 watchOS 8 is set to be released on Monday, September 20.

For those brave enough...how were the betas on watchOS this year? Watch and Mac betas, for me, are too risky, so I don't jump on those!

Not terrible to be honest, it's my daily but I like to live dangerously. Some text message notifications didn't come through and I had to re-pair my airpods (gen 1) mid way in the builds. Still performed well on runs minus my solo braided band not keeping it near my wrist 100% of the time so I'd have to unlock it a few times.
Score: 1 Votes (Like | Disagree)

For those brave enough...how were the betas on watchOS this year? Watch and Mac betas, for me, are too risky to jump on, but still curious how it went!

It failed multiple times to install, “not connected to Internet” falsely displayed on each attempt and on each beta level.

After 4 or so tries and phone put in close proximity to watch 3-4feet away, ie same room, it installed and once installed fine.

Just got up to bring phone into bedroom because it’s failing at verification. Now two minutes later I see the apple on the watch face.

Didn’t ever encounter this with watchOS 7.
Score: 1 Votes (Like | Disagree)

Not terrible to be honest, it's my daily but I like to live dangerously. Some text message notifications didn't come through and I had to re-pair my airpods (gen 1) mid way in the builds. Still performed well on runs minus my solo braided band not keeping it near my wrist 100% of the time so I'd have to unlock it a few times.

Good to hear! So it sounds like this was a pretty decent beta year. I do iOS, iPadOS, and tvOS. No notable issues (at least for me) and it sounds like Monterey has been going more smoothly than Big Sur did.
Score: 1 Votes (Like | Disagree)
Read All Comments