A normal-looking Lightning cable that can used to steal data like passwords and send it to a hacker has been developed, Vice reports. 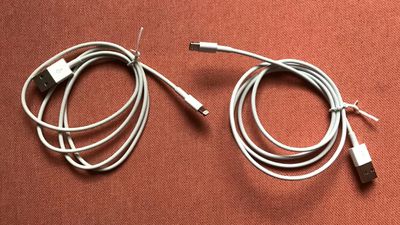 The "OMG Cable" compared to Apple's Lightning to USB cable.
The "OMG Cable" works exactly like a normal Lightning to USB cable and can log keystrokes from connected Mac keyboards, iPads, and iPhones, and then send this data to a bad actor who could be over a mile away. They work by creating a Wi-Fi hotspot that a hacker can connect to, and using a simple web app they can record keystrokes.

The cables also include geofencing features that allow users to trigger or block the device's payloads based on its location, preventing the leakage of payloads or keystrokes from other devices being collected. Other features include the ability to change keyboard mappings and the ability to forge the identity of USB devices.

The cables contain a small implanted chip and are physically the same size as authentic cables, making it extremely difficult to identify a malicious cable. The implant itself apparently takes up around half of the length of a USB-C connector's plastic shell, allowing the cable to continue to operate as normal.

An x-ray view of the implanted chip inside the USB-C end of an OMG Cable.

The cables, made as part of a series of penetration testing tools by the security researcher known as "MG," have now entered mass production to be sold by the cybersecurity vendor Hak5. The cables are available in a number of versions, including Lightning to USB-C, and can visually mimic cables from a range of accessory manufacturers, making them a noteworthy threat to device security.

zorinlynx
>and then send this data to a bad actor who could be over a mile away. They work by creating a Wi-Fi

coachgq
guess I should pay the $20 to apple instead of the $7 to an ebay seller to keep my info safe? Danggit that sucks!
Score: 32 Votes (Like | Disagree)

abbeybound
I'm going to call BS on this. A powerful compute module with memory, wifi with somehow a one mile range, and location services for geofencing, all in half a USB-C connector?
Score: 28 Votes (Like | Disagree)

ersan191
"who could be over a mile away"

Damn the WiFi in my house barely reaches my garage, maybe I need one of these cables.
Score: 28 Votes (Like | Disagree)

bearda
So there's a lot of scaremongering and assumptions being thrown around here. For the key logging function you have to be using the cable to hook up between a keyboard and a device so the traffic can be sniffed. Wireless keyboard aren't affected. Onscreen keyboards aren't affected. iOS devices lock the USB port by default (the phone "unlock your phone to use the connected device" prompt you get when connecting to a car, etc) so it's not like this is going to allow an attacker any additional access to a locked phone.

Don't connect your device to random cables and you'll be fine.
Score: 20 Votes (Like | Disagree)

So who will they sell to?

No one.... They will probably sit in the airport and plug them into the charging stations
Score: 15 Votes (Like | Disagree)
Read All Comments

Wednesday November 24, 2021 11:00 am PST by Juli Clover
We've teamed up with Ampere to offer readers a chance to win one of the company's Jetpack magnetic iPhone power banks, which have been designed with the iPhone 13 lineup in mind. While the $49 Jetpack works with the iPhone 12 or the iPhone 13 lineups, it has been customized to fit the iPhone 13. The magnets won't interfere with the camera, and it works perfectly on Apple's smallest iPhone...
Read Full Article • 19 comments

Saturday January 8, 2022 5:27 am PST by Tim Hardwick
Ever since Apple removed the headphone jack on the iPhone 7 in 2016, rumors have swirled that Apple eventually aims to ditch the Lightning port next for a completely portless design. Indeed, analysts originally predicted that the highest-end ‌‌iPhone‌‌ 13 would offer a "completely wireless experience." Of course, that didn't happen, but a portless iPhone 14 in 2022 looks just as unlikely, for the ...
Read Full Article • 363 comments

Wednesday March 23, 2022 7:46 am PDT by Mitchel Broussard
Nomad this week is offering up to 30 percent off select items during its "Spring Cleaning Sale." This event includes savings on iPhone cases, wireless chargers, Apple Watch bands, AirPods cases, cables, and much more. Note: MacRumors is an affiliate partner with Nomad. When you click a link and make a purchase, we may receive a small payment, which helps us keep the site running. You can bro...
Read Full Article • 4 comments

Wednesday June 29, 2022 5:23 pm PDT by Sami Fathi
The redesigned MacBook Air with the all-new M2 Apple silicon chip will be available for customers starting Friday, July 15, MacRumors has learned from a retail source. The new MacBook Air was announced and previewed during WWDC earlier this month, with Apple stating availability will begin in July. The MacBook Air features a redesigned body that is thinner and lighter than the previous...
Read Full Article • 288 comments