In the latest episode of the Apollo Effect podcast series, Morgan Stanley analyst Katy Huberty discussed the potential for a so-called "Apple Car" to disrupt the auto industry through vertical integration of hardware, software, and services. Huberty also praised Apple CEO Tim Cook, noting that the late Steve Jobs would have been proud. 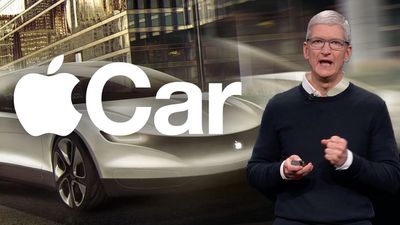 While some reports over the years have indicated that Apple's automotive ambitions might be limited to software and services, Huberty said Apple is most successful when there is vertical integration, as evidenced by the iPhone. Huberty said Apple would want a hand in the design of the vehicle, in how the software communicates with the hardware, and in choosing the right components and technologies to use.

"When you think about what will differentiate the car of the future, it's certainly being creative around new supply chains," said Huberty. "It's about vertical integration of different components, hardware design, software, and ultimately, the services that can be delivered in that automobile. It's about consumer trust and credibility, and certainly brand when it comes to a consumer product. And all of those categories are ones where Apple is a leader."

Huberty said once Apple manages to "get the car right," the company can then introduce services on top. While she did not provide any examples, one could imagine an "Apple Car" having everything from full Apple Music integration like in the Porsche Taycan to built-in displays for rear passengers to watch Apple TV+ shows or play Apple Arcade games.

In a December 2020 research note, Apple analyst Ming-Chi Kuo said an "Apple Car" is unlikely to hit the market until 2025–2027 at the earliest.

Last week marked the 10th anniversary of Cook being named Apple's CEO after Steve Jobs stepped down from the post due to declining health. Huberty reflected on Cook's era in the podcast interview, noting that Jobs would be proud.

"I really think that Tim Cook has done a pretty phenomenal job allowing for Steve's legacy to carry on, protecting that legacy while building his own very separate legacy," said Huberty. "Steve was very much about design and innovation and getting in the weeds in those two areas. Tim has allowed the culture of the company to continue on that front, but at the same time, he's layered in some of the softer aspects that are harder to measure," she added, noting that Cook has successfully scaled operations while placing a greater focus on areas like employee benefits, charitable giving, and environmental responsibility.

"I think if Steve was looking down, he would be very proud of the way that Tim has built his own legacy while protecting the culture and the differentiation around design and innovation that Steve started," she concluded.

Morgan Stanley analyst Katy Huberty discussed the potential for a so-called "Apple Car" to disrupt the auto industry through vertical integration of hardware, software, and services.

While some reports over the years have indicated that Apple's automotive ambitions might be limited to software and services, Huberty said Apple is most successful when there is vertical integration, as evidenced by the iPhone. Huberty said Apple would want a hand in the design of the vehicle, in how the software communicates with the hardware, and in choosing the right components and technologies to use.

If an Apple Car is anything like their other products, Apple disrupting the auto industry wouldn't be a good thing.

- with special proprietary pentalobe screws and bolts
- with non-user friendly replaceable parts and where the parts could only be purchased through Apple. Third party and CAPA certified parts? Pfft! Yeah, right
- that can only be serviced at and by Apple or by an authorized Apple repair/service center. This would even include something as simple as replacing a tire (pentalobe wheel locks) or refilling a tire with air because you'd need a proprietary adapter for the valve stem and a special Apple device to reset the TPMS
Score: 13 Votes (Like | Disagree)

Johnny907
lol the F he would. The butterfly keyboard debacle alone would have had Steve rolling in his grave. People forget the man was a perfectionist. Look at the Gen 2 iPod with capacitive touch controls. It was a good idea but it just didn't work in real world use so Steve tossed it immediately and released the much loved Gen 3 with Clickwheel, a design that became the hallmark for every iPod released afterward other than the Touch or Shuffle. Steve lived the mantra "Do it right or do something else," something that Human Dialtone Cook has struggled with since Day One.
And no, the "that was Ive's fault" argument doesn't work either as Steve was able to keep Ive under control, making sure all his grand ideas worked in the real world and didn't just look pretty, something Cook was never able to do because he never understood Ive and has zero artistic imagination himself.
As for the capital gains Apple has made under Cook, Steve never cared about such things. He was more interested in making the best products around. He was fine being the underdog in overall sales so long as everyone agreed what he made was the best on the market.
Sorry but this analyst clearly didn't understand Steve Jobs at all and is talking squarely out of his rear with this nonsense.
Score: 11 Votes (Like | Disagree)

Larsvonhier
Tim´s done great.
Until the CSAM stupidity, either way: Forced upon Apple or internally bred.
Score: 8 Votes (Like | Disagree)

Okay. So how would these exclusive industry sources and supply chain leakers know whether Steve Jobs would or wouldn't be proud of Tim Cook? Did they contact Steve Jobs and ask him?

No, but I just did. Steve Jobs is very proud of Tim Cook.

Thursday March 3, 2022 4:43 am PST by Hartley Charlton
Apple suppliers are positioning to manufacture and assemble the company's long-rumored electric vehicle (EV), according to a report from DigiTimes. Apple Car concept render by Vanarama based on patents filed by Apple The report claims that Foxconn, the colossal manufacturer behind most iPhone models, and Luxshare Precision, the assembler behind Apple devices such as AirPods, are angling to...
Read Full Article • 93 comments