Apple today announced that LEGO Star Wars Battles from TT Games and Warner Bros. Games is coming soon to Apple Arcade for the iPhone, iPad, Mac, and Apple TV. A specific release date has not yet been shared, but users can sign up to be notified when the game is available by tapping on the "get" button on the game's Apple Arcade listing. 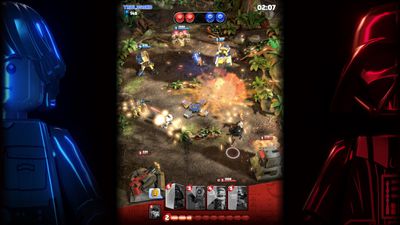 Developed by TT Games Brighton and published by Warner Bros. Games, in collaboration with Lucasfilm Games, the tower defense game will task players with leading their favorite LEGO Star Wars characters into fast-paced, competitive battles. Players will mix and match characters and vehicles from all eras of the Star Wars galaxy and build LEGO towers on the battlefield as they attempt to destroy their opponent's base.

Players can collect iconic characters such as Luke Skywalker, Rey, Obi-Wan Kenobi, Boba Fett, and Darth Vader, and a variety of vehicles and starships, including the Millennium Falcon. As players progress and level up, they will unlock different arenas based on familiar Star Wars locales, including Scarif, Naboo, Hoth, Endor, Geonosis, and more.

That is good. I lost a lot of Lego games with the 32-bit purge. I still notice there is a lot of hate from people that hate Apple Arcade. This is what Palpatine said about your hate.

“Good! Your hate has made you powerful. Now, fulfill your destiny and take your father’s place at my side!”

Rant:
I didn’t care about Apple Arcade but wasn’t against it either, as I think Apple is primed to be able to do something on the living room’s games front… iOS and all being huge commercial successes revenue wise and the performance surpassing the Nintendo Switch two-fold or more.

My brother and I wanted to play a bit of Modern Warfare Spec Ops missions a few days ago… turned on the PS4, got prompted with a system update of many several GBs, after finishing it queued another many GBs system update while MW queued around 120+GB of “updates” to be able to play what we wanted to play. There was another many tons of GBs for some textures pack updates which we scratched… don’t even know if all that game fits in one single 512GB PS4 model.

Since I have Apple One, we decided to leave the thing updating, connected one of the PS4 controllers and an XBox controller to the Apple TV. Played a few games, some single player like Fantasian, Beyond A Steel Sky, old classics like Horizon Chase and Alto’s, bought Chrono trigger, tried a couple couch multiplayer games (not that many but looks promising though)… we actually had a blast and then went to sleep. I guess the PS4 finished it’s thing in sleep mode but I didn’t care anymore, those practices can go eat dirt.

Regarding accessibility, Apple Arcade (and AppStore games for that matter), are several times more accessible and faster to get to play than whatever it’s happening on consoles nowadays… got a physical disc? “cool”, but the thing still needs to be installed, then updated, then updated again. Frustrating… was on a gaming hiatus from it, now I remember why.

Sure, there’s yet no Horizon Zero Dawn, Dark Souls, etc level of a game (or whatever rock’s anybody’s AAA boat), but I really really hope Apple continues to move these forward and hopefully some games that inch closer to those epic ones would appear… because as it is currently it’s borderline infuriating to get to play anything that’s supposedly “AAA masterpiece”.
Score: 3 Votes (Like | Disagree)

Orionfox
Looks like a big step up and worth checking out, but Rey is an "iconic character"?
Score: 2 Votes (Like | Disagree)

BornAgainMac
That is good. I lost a lot of Lego games with the 32-bit purge. I still notice there is a lot of hate from people that hate Apple Arcade. This is what Palpatine said about your hate.

“Good! Your hate has made you powerful. Now, fulfill your destiny and take your father’s place at my side!”
Score: 2 Votes (Like | Disagree)

LeadingHeat
Definitely getting this. It looks awesome!
Score: 1 Votes (Like | Disagree)

cmaier
Looking forward to it - tower defense is my genre.
Score: 1 Votes (Like | Disagree)
Read All Comments

Tuesday October 19, 2021 9:56 am PDT by Juli Clover
Apple Arcade is set to gain another LEGO game, with LEGO Star Wars: Castaways set to launch on the gaming service on Friday, November 19. The game is available on iPhone, iPad, Mac, and Apple TV. LEGO Star Wars: Castaways features a storyline where players crash land on a mysterious planet in the middle of a maelstrom. The planet is not abandoned, and gamers can meet both LEGO NPCs and other ...
Read Full Article • 9 comments

Sunday January 23, 2022 10:32 am PST by Juli Clover
Apple is working on a number of new products that are set to launch this fall, and Bloomberg's Mark Gurman says that it will be "the widest array" of new devices that Apple has introduced in its history. In his latest "Power On" newsletter, Gurman explains that Apple is working on four new flagship iPhones (iPhone 14, iPhone 14 Max, iPhone 14 Pro, and iPhone 14 Pro Max), an updated low-end Ma...
Read Full Article • 233 comments