Classic puzzle game Myst has been revived on the Mac and an optimized version of the title is now available for M1 Macs. 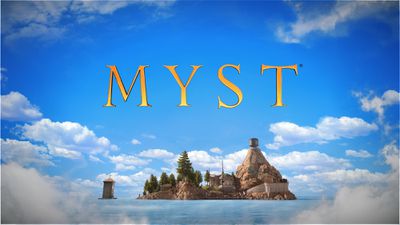 Cyan has undertaken a rework of the game that takes advantage of Metal 2.1 and AMD FidelityFX Super Resolution for a 50 percent performance boost on ‌M1‌ Macs that does not impact game quality.

Myst for ‌M1‌ Macs features improved modeling, textures, and dynamic lighting effects, and Apple's machines are able to run the game at 4K resolution without noisy fans. It's also been reimagined for a VR gaming experience.

Myst is compatible with both Intel and ‌M1‌ Macs. According to the system requirements, it works with the following machines:

The updated version of Myst can be downloaded from the Mac App Store for $29.99.

jayducharme
It amazes me that this game is nearly 30 years old and yet is still being tweaked and supported. Kudos to the developers.
Score: 23 Votes (Like | Disagree)

This game was nothing but static images and pre-rendered video sequences. There's absolutely no reason why a game that just plays back videos would have caused "noisy fans" to turn on.

I feel sorry for the folks who fall for this marketing garbage and buy a game expecting it use even 1% of their hardware.

This is a complete remake with realtime 3D graphics, not just some minor update to a 30-year-old slideshow game.

[Edit]
That said, I wish Cyan had been more ambitious with this remake. It's maybe more accurate to describe it as a modern reproduction. The designs, layout, and puzzles will be almost identical to that 30-year-old game. While it hits the nostalgia button for a lot of people, I don't think this game will have much impact in bringing a new generation into the Myst universe because the design is so dated.

The original Myst was groundbreaking for its time, but a modern gamer won't be able to escape noticing all the ways the design was limited by the technology of the time. Everything is just too small and too "just so", as if someone made a papier-mache model of a world. Even just considering Myst island, this was supposed to be Atrus and Catherine's home, where Sirrus and Achenar grew up. But there is nowhere for them to live. Each building is a single tiny room and the island itself would have gotten washed away in the first storm that hit it. Everything there was built for a single purpose, being delivering a clue or serving as a gateway to a different age. It's just not natural or realistic (even in the fantastical sense of realism that the later games in the series had).

I really want to see Myst writ large, with a scale, detail, and ambiance that match its epic premise.
[/Edit]
Score: 12 Votes (Like | Disagree)

doolar
Marathon next? Will definitely give this a spin!
Score: 11 Votes (Like | Disagree)

This game was nothing but static images and pre-rendered video sequences. [...] I feel sorry for the folks who fall for this marketing garbage and buy a game expecting it use even 1% of their hardware.

The game was that...back in 1993. Today, however, it's being rendered in realtime at 4K with optional raytracing as you, the player, freely traverse the terrain.

Any more-knowlegble people who can chime in on the matter?

The Steam and GOG versions support VR, but not for macOS. VR support is only available in the PC versions.
Score: 9 Votes (Like | Disagree)