Back in November, Universal Electronics announced the launch of a third-party Apple TV Remote that was meant to be provided to cable, satellite, and MVPD customers. At the time, there was no word on which cable companies might offer the remote, but now it appears that it's available through T-Mobile parent company Deutsche Telekom. 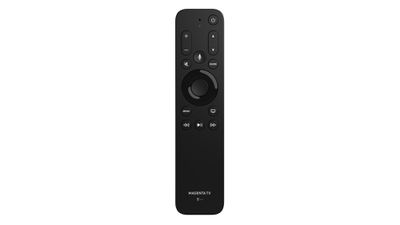 Deutsche Telekom's website for MagentaTV says that the remote control was "developed for MagentaTV" and has been certified by Apple. The Bluetooth-enabled remote can be used to get directly to MagentaTV's content, and it offers similar functionality as Apple's own Siri Remote.

The MagentaTV button goes to the electronic content guide for the service, and there are dedicated channel up/down buttons for browsing. A ‌Siri‌ button activates ‌Siri‌ on the ‌Apple TV‌, and there are also buttons for controlling content playback.

Universal Electronics says that its remote features an ergonomic form factor with hard-capped keys for enhanced tactile feedback, along with an accelerometer and ambient light sensor to power backlit keys in low light environments. It includes Apple's Made for iPhone authentication chip to ensure secure connectivity to the ‌Apple TV‌.

This is not the first time that an alternative ‌Apple TV‌ remote has been made available for cable customers. Swiss telco Salt in 2019 launched a third-party remote control option for the ‌Apple TV‌, for example.

Apple in April 2021 refreshed the Apple TV 4K and introduced a revamped version of the ‌Siri‌ Remote that's larger and thicker, with an aluminum body. The new version of the remote does away with the touch surface that was at the top of the prior remote and instead adopts a touch-enabled clickpad that has gesture support.

cloudphrenia
I'm just starting to like the new aTV remote, but I may have to pick this one up someday for that backlight. It is a shame Apple left that out.
Score: 3 Votes (Like | Disagree)

kerr
Black is not the ideal color for a tv remote.
Score: 3 Votes (Like | Disagree)

Apple in April 2021 refreshed the Apple TV 4K ('https://www.macrumors.com/roundup/apple-tv/') and introduced a revamped version of the Siri Remote that's larger and thicker, with an aluminum body. The new version of the remote does away with the touch surface that was at the top of the prior remote and instead adopts a touch-enabled clickpad that has gesture support.

Too bad that many of the games on Apple Arcade won't work with the new remote since it lost some of the sensors that the original Siri Remote has.
Score: 2 Votes (Like | Disagree)

jwt0001
Isn’t this the one that Spectrum is selling to its customers that is specially programmed for their app?
Score: 1 Votes (Like | Disagree)

contacos
I just use the remote of my tv for the Apple TV ??‍♂️ Much less likely to loose on the couch due to its color and size
Score: 1 Votes (Like | Disagree)