Apple intends to bring new variations of its Time to Walk feature to Apple Fitness+ subscribers, with "Time to Run" and "Audio Meditations" set to debut alongside the Apple Watch Series 7 launch, according to well-connected Bloomberg reporter Mark Gurman. 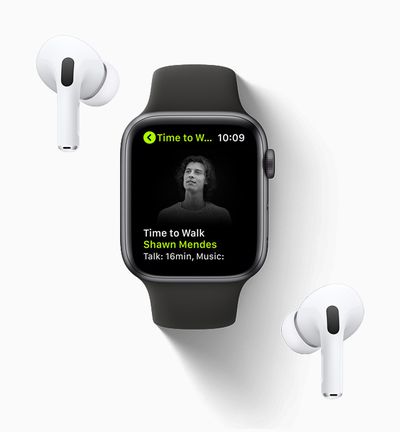 Launched in January, Time to Walk are audio stories from influential people that Apple Watch users can listen to with AirPods or other wireless headphones while walking.

Time to Walk episodes are automatically downloaded to the Apple Watch with a Fitness+ subscription, and users can start an episode directly from the Workout app. An equivalent Time to Push is available for wheelchair users.

In his latest PowerOn newsletter, Gurman suggests the new running and meditative variations on the theme will arrive in the fall when Apple launches the Apple Watch Series 7, which is expected to debut a minor redesign featuring a flatter display and updated screen technology, along with a faster processor.

When the audio stories arrive, Apple Fitness+ subscribers will presumably be able to open the Workout app on an Apple Watch, select "Time to Run," and choose from one of the audio stories to listen to during their run. "Audio Meditations" sound less workout/fitness oriented, so maybe they'll live in the new Mindfulness app.

Meanwhile, Apple has continued to improve the Fitness+ interface in successive beta versions of iOS 15, including the introduction of additional filters for some workout types, such as "Equipment" and "Body Focus" in the Strength category.

Worlrl
How about they will focus on launching it on regions other than English speaking countries, give me the choice I don’t care it’s not translated.
It’s one of the reasons I bought the Apple Watch and still 1 year later we don’t get it
Score: 9 Votes (Like | Disagree)

I’m disappointed as it was one of main reasons I decided to buy iWatch during COVID time. Otherwise I would stick to my old watch (no advertisement, hence no company name).

I don’t believe Apple in this statement without clear cut for a roadmap. Where? By when?

Once they share it - I will believe in it. Otherwise it’s PR blah blah and even not most of commonwealth countries are the audience for it.
Score: 3 Votes (Like | Disagree)

profets
I absolutely hate that whenever I go to start a workout on my watch that Time to Walk is the default at the top of the list. Prior to Fitness+ my most used workout types would be at the top. Anyone have any idea if this can be customized at all?
Score: 3 Votes (Like | Disagree)

I think you can swipe from right to left to remove it.
Score: 3 Votes (Like | Disagree)

Drives me nuts too.. Wish there was a simpler UI for starting/choosing exercises.. Like six little circles with icon of activity on screen instead of scrolling one at a time.

On your phone go to the Watch app and scroll down to "Workout" settings. Scroll to the bottom and you can toggle off "Add Newest Workouts to Watch" and they won't show up unless you add them through the Fitness app
Score: 2 Votes (Like | Disagree)

How about they will focus on launching it on regions other than English speaking countries, give me the choice I don’t care it’s not translated.
It’s one of the reasons I bought the Apple Watch and still 1 year later we don’t get it

I agree.
Fitness+ is one of the biggest Apple Watch features and I can't even try it.
Score: 2 Votes (Like | Disagree)
Read All Comments