Apple is researching ways to hide the iPhone's notch when it is not in use and expand the display, according to a newly granted patent. 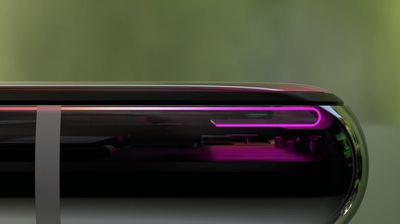 The patent, first spotted by Patently Apple, is titled "Electronic devices with adjustable display windows" and was filed with the U.S. Patent and Trademark Office. It explains how a device's display could move as to show and hide the front-facing camera and other optical components.

Apple describes this mechanism as creating a "window region" in the display, through which a camera or other TrueDepth array components, such as a dot projector for Face ID, can work. Then, when these parts are not in use, the display would move back over the window region to hide the sensors underneath it. The summary of the patent reads:

The patent describes two main mechanical means through which the display could move to create a window for the notch components. The first is a display that is a flap formed either by a flexible display or a separate rigid display layer that moves about a hinge. This flap would be bent away from the rest of the display to open up the window region.

The second embodiment is a flexible display that moves via an electrically adjustable actuator, which would slide the entire display down to open the window region and show the notch components. These mechanical movements would occur under the glass of the display.

Apple mentions that the display window may have a coating to help it reflect light for the optical components and that it may be transparent to light emitted by pixels when the movable display portion is closed. The patent also explains that the window region could use a mirror in a periscope-like formation to conceal the optical components, much like the folded camera configurations on some Android smartphones.

While patents are not a confirmation of Apple's exact plans for future products, they do highlight the company's specific areas of research. Apple is believed to be exploring a hole-punch front-facing camera layout for the ‌iPhone‌ as soon as 2022, with the total removal of the notch expected by 2023. The technology outlined in this patent is one way in which Apple could achieve this objective.

wutnow
I don't see them actually putting moving parts inside an iPhone...
Score: 30 Votes (Like | Disagree)

TheYayAreaLiving ?
The notch doesn’t bother me at all. Please work on making a 2 day battery life on a single charge. That’s more beneficial, ideal and appreciative.


I don’t think Apple itself likes the hole punch idea ? they just want a flat slab of screen. That’s the ultimate iPhone.

Update: I have another idea!

Maybe swipe up and down gesture to show the notch and hide it? This can activate the camera itself as well.

blackhawk10
I've owned every iPhone model with "the notch" and it never bothered me....I don't even notice it!!
Score: 14 Votes (Like | Disagree)

Sharkoneau
One drop with these mechanical parts, and I’d never see the camera again ?
Score: 13 Votes (Like | Disagree)
Read All Comments