Realme is gearing up to launch what it's creatively calling "MagDart," an accessory for its upcoming flagship smartphone, that much like Apple's MagSafe announced earlier last year, will utilize magnets to charge the device by snapping onto its back. 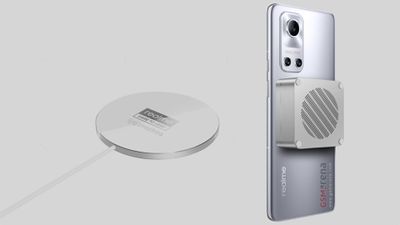 Realme's CEO, Madhan Sheth, confirmed the news via a tweet, stating that "Realme Flash" will be the "world's 1st Android phone with Magnetic Wireless Charging." The CEO's tweet didn't offer any specifics on the magnetic wireless charger, but the folks over at GizmoChina are reporting what Realme customers can expect.

The second model, featuring a more unorthodox design, is a larger charger with a built-in fan to help "keep thermals in check during charging." Compared to the thinner "MagDart" charger, the more bulky model will offer charging speeds "that will rival modern wired fast charging tech." Both the thin and larger "MagDart" chargers will function as expected by clipping onto the back of the "Realme Flash."

For example, Apple sells not only ‌MagSafe‌ chargers but also cases, wallets, and more. It remains unclear whether Realme's "MagDart" is just one part of a larger ecosystem of magnetic accessories the Chinese maker plans to launch for the Android market.

dannyyankou
Reminds me of a window fan

contacos
that is one of the most ridiculous things I have ever seen. A external charger with a fan hahahahaha
Score: 11 Votes (Like | Disagree)

TFK.
when the charger needs a fan you know its bad
Score: 8 Votes (Like | Disagree)

wyarp
I remain REALLY CONFUSED at to why these options for charging are somehow seen as preferable to standard charging with a port? Both need to be need a power source anyway but both feature units that are waaaaaaaay larger, uglier and more intrusive than a simple USB port!
Score: 7 Votes (Like | Disagree)

philstubbington
I love the aesthetics of the fan - why not attach a hose and a bucket to collect the water? ;)
Score: 6 Votes (Like | Disagree)
Read All Comments

Tuesday November 30, 2021 2:54 am PST by Sami Fathi
Some 16-inch MacBook Pro owners appear to have identified a shared issue suggesting the MagSafe 3 connector sometimes fails to deliver the expected charge when their Mac is turned off and the lid is closed. As outlined on Reddit, some 16-inch MacBook Pro Models, when powered off, are failing to charge if the MagSafe connector is plugged in. Instead of turning green, the MagSafe light flashes ...
Read Full Article • 146 comments

Wednesday July 14, 2021 2:21 pm PDT by Juli Clover
ElevationLab, known for its range of useful accessories for Apple's devices, today introduced the MagBase, which is designed to increase the functionality of Apple's MagSafe Charger. Priced at $9.95, the MagBase is a small attachment that fits onto the MagSafe Charger. It has a micro air suction surface at the bottom, which ElevationLab has used in prior products. This micro air suction is...
Read Full Article • 49 comments

Deals: Take 20% Off MagSafe-Compatible Accessories and More at Belkin

Tuesday November 9, 2021 11:38 am PST by Mitchel Broussard
Belkin today began a new sale for "Singles Day," which is an international shopping holiday similar in spirit to Black Friday and Cyber Monday, held annually on November 11. Belkin's sale takes 20 percent off sitewide with code SINGLE21 through the 11th. Note: MacRumors is an affiliate partner with Belkin. When you click a link and make a purchase, we may receive a small payment, which helps...
Read Full Article • 4 comments

Friday July 23, 2021 7:38 am PDT by Mitchel Broussard
Woot today has Apple's MagSafe Charger in new condition for $29.99, down from $39.00. The previous best sale for the accessory was $29.85 at Amazon, so Woot's new discount is nearly a direct match for the all-time low price on the MagSafe Charger. Note: MacRumors is an affiliate partner with some of these vendors. When you click a link and make a purchase, we may receive a small payment, which ...
Read Full Article • 10 comments

Friday December 2, 2022 10:54 am PST by Juli Clover
Google is continuing on with its attempt to convince Apple to adopt the RCS messaging standard, publishing a new "it's time for RCS" blog post. Promoted heavily by Google, RCS or Rich Communication Services is a messaging standard that is designed to replace the current SMS messaging standard. It provides support for higher resolution photos and videos, audio messages, and bigger file sizes, ...
Read Full Article • 623 comments