Apple Maps vehicles rigged with LiDAR equipment are collecting street-level imagery and data in several more countries and regions this summer, including Austria, Switzerland, and Hong Kong, according to a list of locations maintained on Apple's website. The vehicles have also returned to Belgium to survey additional regions after focusing on the Brussels area last year. 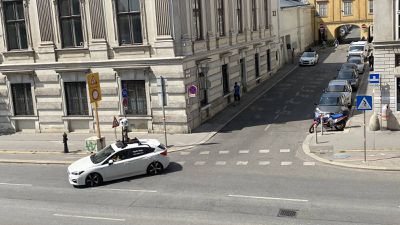 Apple Maps vehicle in Vienna, Austria. Photo submitted by Alexander Schilowsky.
Apple will use the data collected to improve its Maps app and expand its Look Around feature, which is currently limited to parts of the United States, Canada, United Kingdom, Ireland, and Japan. Introduced in iOS 13, Look Around is similar to Google's Street View, providing 3D street-level imagery that can be zoomed and panned.

Where available, Look Around can be accessed by tapping the binoculars icon in the top-right corner of the Maps app. Look Around also appears in the search results for a supported city, below the Flyover and Directions buttons.

On its website, Apple says it is committed to protecting the public's privacy while conducting surveys. For example, Apple blurs out faces and license plates in street-level imagery made available through Look Around.

Morgenland
What an enormous effort Apple is daring to make here. I'm thrilled. In 10 years, we will know quite naturally how these image worlds are adapted to changes. And how your city and my small village will also be included.. One can eagerly discuss the most likely update scenarios (your  Car /  Glasses).
Now the world is being resurveyed in an unprecedented topography. Kudos to those responsible for and working on this huge project. Hardly any of us MR readers could put this into the world.

And now the critics may start, I'm out.

nwcs
At this rate they’ll be finished in another 60 years but most of them will be decades out of date. They simply need more vehicles or whatever out there doing this to accelerate the pace.
Score: 4 Votes (Like | Disagree)

mikey918
That’s nice, but can they PLEASE try and focus on data collection outside the same metro areas? Those of us in the suburbs sure would love to be included for once.
Score: 3 Votes (Like | Disagree)

Apple will use the data collected to improve its Maps app and expand its Look Around feature ('https://www.macrumors.com/how-to/use-look-around-in-maps/'), which is currently limited to parts of the United States, Canada, United Kingdom, Ireland, and Japan.

Well, Look Around is also available across Spain and Portugal.
Score: 3 Votes (Like | Disagree)
Read All Comments

Friday June 24, 2022 9:48 am PDT by Juli Clover
The next-generation AirPods Pro could come with a long list of new features that include heart rate detection, the ability to function as a hearing aid, and a USB-C port according to a report from 52Audio. The site claims that it has received new information on the AirPods Pro 2, and it has used that information to provide some renders on what the earbuds might look like. Design wise, there...
Read Full Article • 119 comments