Apple Maps Vehicles to Begin Surveying Belgium and the Netherlands

Apple Maps vehicles will begin surveying Belgium and the Netherlands during June, according to a list of locations maintained on Apple's website.

The data collected will be used to improve Apple Maps and to expand its Look Around feature, which remains limited to a handful of U.S. cities. Introduced in iOS 13, Look Around is similar to Google's Street View, providing a street-level view of supported locations with high-resolution 3D imagery that can be zoomed and panned. 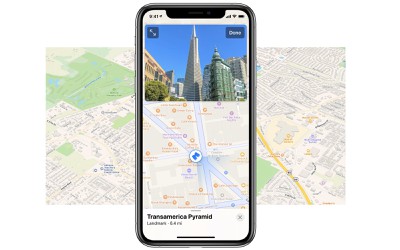 One advantage of Look Around over Street View is smoother panning when moving around the map for a more immersive experience. As with Street View, Apple blurs faces and license plates in all of the 3D imagery that it makes available.

il_teo77
Should have profited more of the Coronavirus lockdowns in many parts of Europe. Less traffic (much less), empty streets. Would have made for less clutter to delete from the images. Although seeing all stores and restaurants closed would have conveyed an eerie feeling to the images.
Score: 2 Votes (Like | Disagree)

Yet no street view in most of America.

It covers most of the most densely populated areas. I don't need it in the middle of nowhere..
Score: 2 Votes (Like | Disagree)

hanske68
Wow, even before the HomePod is made available. Way to go Apple.

O wait... it is just a start. That means it will take another decade or so before the result will be available...

The pace of technology these days is overwhelming...
Score: 1 Votes (Like | Disagree)
Read All Comments

Monday May 17, 2021 6:06 am PDT by Joe Rossignol
Apple today announced that Apple Music will be gaining support for Spatial Audio with Dolby Atmos at no additional cost starting in June. At launch, Apple Music subscribers will have access to thousands of songs in Spatial Audio from artists like J Balvin, Gustavo Dudamel, Ariana Grande, Maroon 5, Kacey Musgraves, The Weeknd, and many others. Apple says this feature will provide a...
Read Full Article • 423 comments