iDOS 2, an app designed to allow users to play classic DOS games, will soon be pulled from the App Store, the app's creator said today. 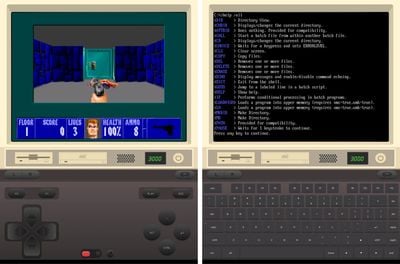 According to iDOS developer Chaoji Li, he tried to submit an iDOS update with bug fixes to the ‌App Store‌, but was told that the update was rejected because it violated the 2.5.2 ‌App Store‌ guideline that says apps cannot install or launch executable code.

During review, your app installed or launched executable code, which is not permitted on the App Store.

Specifically, your app executes iDOS package and image files and allows iTunes File Sharing and Files support for importing games. Executing code can introduce or changes features or functionality of the app and allows for downloading of content without licensing.

Please note that while educational apps designed to teach, develop, or allow students to test executable code may, in limited circumstances, download code, such code may not be used for other purposes and such apps must make the source code completely viewable and editable by the user.

Apple's ‌App Store‌ team has given Li 14 days to submit an update removing the offending functionality, or the app will be removed from the ‌App Store‌.

iDOS 2 went four years without an update because of Apple's restrictions on iTunes file sharing and bundling game files without ownership, but in 2020, Li implemented document storage and was able to once again update the app.

Since 2020, iDOS has been able to run games and programs accessed through file sharing, which Apple now says is not allowed. Li says that he never aimed to trick or fool reviewers, and instead made it clear with each update how the app worked.

Li says that he is not going to cut the critical functions of the iDOS 2 app to comply with Apple's ‌App Store‌ rules, because it would be a betrayal of users who purchased the app for those features.

iDOS 2 is still available for purchase at the current time, but Apple may soon be pulling it from the ‌App Store‌.

zorinlynx
Those of us who ask for sideloading, this is another big reason why.

We should be able to run software on hardware we own even if it goes against Apple's moral code.
Score: 90 Votes (Like | Disagree)

HiVolt
What "executables" is it running other than the DOS programs its emulating? How the hell do you run those otherwise?

Apple truly loves to control everything. And yes, this is why you need the ability to sideaload.
Score: 63 Votes (Like | Disagree)

Mockletoy
This is the kind of consumer-hostile nonsense that is making me think long and hard about what I intend to replace my XS Max with.

I’d love to hear Apple explain how not letting me play 25 or 30-year-old games for a quick nostalgia fix is for my own good.

WB2Colorado
If there was ever a case for sideloading, this is it right here.
Score: 41 Votes (Like | Disagree)

LawJolla
This is absolute crap. Half of the App Store apps are wrapped Javascript / React Native apps that dynamically load to your phone every launch.
Score: 37 Votes (Like | Disagree)

frogslapper
The future sucks. Unimaginable power in the palm of our hands, but neutered by the whims of the most valuable and powerful corporation in the world.
Score: 31 Votes (Like | Disagree)
Read All Comments