The winners of the 14th annual iPhone Photography Awards were announced today following submissions from thousands of photographers from all over the world. 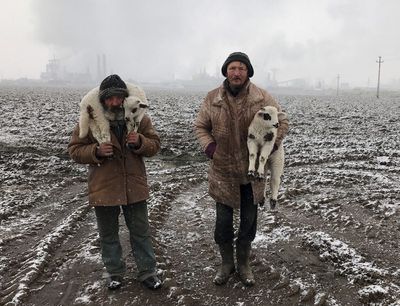 "Bonding" (top) and "A Walk on Mars" (bottom) shot by Sharan Shetty and Dan Liu respectively
Top-three winners in an additional 17 categories were awarded to photographers from almost every corner of the world, including Australia, Austria, Bangladesh, China, Greece, Hungary, Italy, Israel, the Netherlands, Mexico, Russia, Saudi Arabia, Spain, Sweden, the United Kingdom, and the United States.

We've highlighted a few of the winning photos here and the full gallery can be viewed on the iPhone Photography Awards website.

maxolson
Proving yet again that your years old phone is more than capable of producing evocative images. We're inundated with media telling us we need the latest and greatest: sharper lenses, higher megapixel count etc. When it all just comes down to composition, light, subject and editing– just like it always has. What a great collection of images.
Score: 10 Votes (Like | Disagree)

To be honest, those are three boring photos. I’m at a loss to understand how they won anything. Maybe the people who voted for them have no clue about photography are what makes a good award winning photograph. They are all boring and dull.

You could’ve been explained your photography ignorance in less words.
Score: 10 Votes (Like | Disagree)

Proving yet again that your years old phone is more than capable of producing evocative images. We're inundated with media telling us we need the latest and greatest: sharper lenses, higher megapixel count etc. When it all just comes down to composition, light, subject and editing– just like it always has. What a great collection of images.

Amen to that! I have images from an iPhone 5s and 6+ that still stand up.

Images that are powerful and release evocative narratives have little to do with the camera/device that recorded them. The first two photos up above are outstanding examples of that.
Score: 5 Votes (Like | Disagree)

maxolson
With such hard-hitting criticism as 'they are boring and dull', I doubt you'd make much of a judge.

To be honest, those are three boring photos. I’m at a loss to understand how they won anything. Maybe the people who voted for them have no clue about photography are what makes a good award winning photograph. They are all boring and dull.

tedwill
As much as I try to capture great images on my Leica, I get more "keepers" from the camera that's with me and that tends to be my iPhone. These are all great photos by the way. But yes, iPhones are limited by the tiny sensors compared to full frame and medium format cameras, but it's hard to fit a Hasselblad in my back pocket! ?
Score: 4 Votes (Like | Disagree)
Read All Comments