Fakespot, which is known for analyzing reviews from popular websites to determine their accuracy, today had its iOS app removed from Apple's App Store. 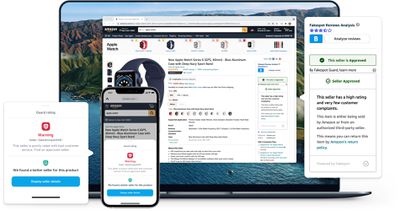 According to The Verge, Amazon sent Apple a takedown request, which led to the app being pulled. Fakespot's iOS app just launched in June, and it was designed to allow users to log into Amazon and buy items while using the Fakespot engine to analyze the reviews.

Amazon said that Fakespot's app was "wrapping" the website without permission and that the app could potentially be exploited to steal Amazon customer data. Amazon sent the initial takedown notice in June, and today, Apple kicked the app from the ‌App Store‌.

Amazon claimed that Fakespot violated Apple's 5.2.2 ‌App Store‌ guideline that prevents apps from using, accessing, monetizing access to, or displaying content from a third-party service if not authorized to do so. A statement from Amazon said that the app was giving customers "misleading information" about Amazon sellers.

"The app in question provides customers with misleading information about our sellers and their products, harms our sellers' businesses, and creates potential security risks. We appreciate Apple's review of this app against its Appstore guidelines."

Fakespot founder Saoud Khalifah told The Verge that Apple did not give it an opportunity to solve the problem. "We just dedicated months of resources and time and money into this app," he said. He went on to say Amazon's willingness to "bully little companies" showcases "cracks in their company."

A search for Fakespot confirms that the Fakespot app is no longer available for download from the iOS ‌App Store‌. While it was active, it had more than 150,000 installs.

Fakespot is well known for analyzing Amazon reviews and providing a rating or grade on how many of those reviews come from actual people. Amazon says that it regularly analyzes products with reviews that Fakespot calls out as untrustworthy, but that Fakespot's findings "were wrong more than 80% of the time."

Amazon says that Fakespot does not have the appropriate information to "accurately determine the authenticity of a review." Fakespot's website continues to be active and is available for Amazon shoppers to use, plus there is a browser extension for Chrome and Firefox.

Update: Apple in a statement provided to MacRumors explained that the dispute was between Amazon and Fakespot, and that Fakespot had been contacted multiple times.

This was a dispute over intellectual property rights initiated by Amazon on June 8 and within hours we ensured both parties were in contact with one another, explaining the issue and steps for the developer to take to keep their app on the store and giving them ample time to resolve the issue. On June 29, we again reached out to Fakespot weeks before removing their app from the App Store.

turbineseaplane
Amazon has become a cancer on society at this point.

collin_
I don’t know how accurate Fakespot is, but I do know that Amazon has every incentive to suppress and/or lie about it.
Score: 41 Votes (Like | Disagree)

trainwrecka
I'm tired of the cheap Chinese knock-off products that break shortly after purchase. The site is flooded with them, because Amazon brings them over by the boatload and delivers them to you next day. Not kidding - it is literally giant tankers bringing them over.

TheYayAreaLiving ?
tired of the fake reviews.
Score: 38 Votes (Like | Disagree)

connormw
I mean let's be honest here, it's a pretty clear-cut violation of the rules. We all know the App Store rules can be ambiguous and loosely enforced, but this one seems pretty obvious:

5.2.2 Third-Party Sites/Services: If your app uses, accesses, monetizes access to, or displays content from a third-party service, ensure that you are specifically permitted to do so under the service’s terms of use. Authorization must be provided upon request.

The app put Amazon in a wrapper, injected code into the web viewer experience for the functionality, and then was on the App Store as a separate app. We all know if someone made an "Apple Shop Helper" app that showed, say, competing prices elsewhere, that Apple would shut it down in a heartbeat for displaying content from a 3rd party that did not consent to the integration.
Score: 37 Votes (Like | Disagree)

The analysis isn't perfect, but it's certainly good enough and much better than nothing. Which is exactly what Amazon wants -- ignorant shoppers.

Amazon just wants people to buy anything and everything.
They don't give a single lick if there are fake reviews, fake products, knockoffs, etc.
Score: 33 Votes (Like | Disagree)
Read All Comments

Tuesday November 23, 2021 3:34 am PST by Tim Hardwick
Apple and Amazon were today fined a total of more than 200 million euros ($225 million) by Italy's antitrust authority for alleged anti-competitive cooperation in the sale of Apple and Beats products, reports Reuters. The fines are the culmination of an investigation that began last year over allegations that the two companies had been blocking the sale of Apple and Beats devices to...
Read Full Article • 113 comments

Friday August 12, 2022 12:46 pm PDT by Juli Clover
Samsung this week launched its fourth-generation foldable devices, the $1,000 Galaxy Z Flip and the $1,800 Galaxy Z Fold. Though there's no sign of a comparable Apple foldable device on the horizon, rumors suggest prototypes are in the works, so we thought we'd take a look at Samsung's newest smartphones to see what Apple needs to measure up to when a foldable iPhone does come out. Subscribe ...
Read Full Article • 238 comments