Apple today released the third betas of iOS 15 and iPadOS 15, and the company is continuing to refine the suite of new features that are coming in the update. There have been multiple complaints about Safari on iOS, so in the third beta, Apple has introduced some refinements. 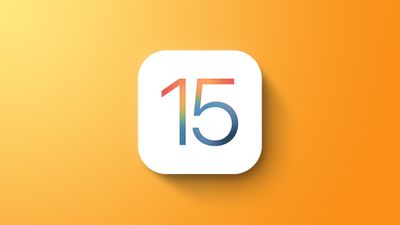 This article covers everything that's new in the third beta of iOS 15.

When you tap into a URL bar on a Safari tab, the interface for entering another URL or a search term has been relocated to above the keyboard. Previously, it was located at the top of the start page. The search interface has also been streamlined.

There's now an option to long press on a floating tab bar to initiate a reload, which is an alternative to using the built-in menu option.

When you reload a tab in Safari, the tab gets a permanent reload icon that can then be tapped to refresh again. The reload icon is only available in portrait mode on iPhone, but it shows up in both portrait and landscape mode on iPad. Making the button appear requires an initial reload, something that Apple may streamline in the future.

The new Safari features introduced in iOS 15 and macOS Monterey were not brought to the ‌iPad‌, so iPadOS 15 in beta 3 offers the same Safari experience as beta 2. Apple is, however, planning to add Safari updates to a future version of iPadOS 15, improving the usage experience on the ‌iPad‌ as well.

Daring Fireball's John Gruber says some of the same changes brought to iOS 15 and macOS Monterey will also be added in iPadOS 15.

The good news is that today's betas show that Apple has taken criticism of the new Safari UI designs seriously -- on MacOS, Safari once again defaults to showing the tab bar as a discrete UI element in the window, with one URL address bar. (Similar changes are coming for iPadOS, but didn't make it for today's beta.) The iOS changes today aren't as significant, but, having talked to folks at Apple, there are a lot of changes and refinements still to come as summer progresses.

There is a new App Store splash screen that highlights new features available in the ‌App Store‌ in iOS 15 such as in-app events in apps and games, the ‌App Store‌ widget, and Safari Extensions on iOS.

In the Focus interface in the Settings app, Apple has removed the Focus Status and Phone Calls options from the main interface, relocating them into each Focus section.

The Apple Music widget now changes color and art based on the individual song that's playing rather than using album art. It's also more clear when a song is playing and when it's paused thanks to a new "Paused" label.

In the Settings app under General, the "Reset" button for the ‌iPhone‌ is now "Transfer or Reset ‌iPhone‌." In this interface, the "Prepare for New ‌iPhone‌" option is front and center. Prepare for New ‌iPhone‌ was an option in the prior beta, but Apple is now assuming that most people want to use this section to set up a transfer to a new ‌iPhone‌. All of the reset options for Network Settings, Keyboard Dictionary, Home Screen Layout and more are still there, but are now housed under the "Reset" button.

There are actions for Background Sounds in the Shortcuts app to set a sound track, adjust volume, tweak volume when media is playing, and more.

Missing the days when iOS updates were exciting. Love Apple but this is worse than meh. Long list of user requested features still ignored.

I'm glad that they seem to be focusing on stability for this release based on the early beta reports that I've heard. We don't need big changes each year. refinement is a feature too
Score: 11 Votes (Like | Disagree)

kuwxman
Still not a fan of the address bar being at the bottom. It gets in the way when trying to click things at the very bottom of pages.
Score: 9 Votes (Like | Disagree)

While I’m sure they went through countless hours testing the UI/UX, having the url bar in the middle (top of keyboard) like that just seems so clunky. Plus how huge it is vs the size now. I’m sure it’ll be a transition at first, and I’ll get used to it. But I wonder why the change when macOS Safari is still at the top of the page.

I agree. The floating url bar gains nothing and screws up a vast swathe of the internet. So many sites/apps use a fixed footer and this makes them orphaned in the middle of the screen. Feels like change for changes sake.
Score: 8 Votes (Like | Disagree)

WannaGoMac
Apple i have PLENTY of space at the top of safari. Stop hiding every damn icon for no reason. Geesh, now even the reload button is hidden in a menu.

How bored are these GUI people at Apple?
Score: 8 Votes (Like | Disagree)

GMShadow
Just bring back old Safari. It was fine. This release is just fiddling with things to say you did.
Score: 8 Votes (Like | Disagree)

LeadingHeat
While I’m sure they went through countless hours testing the UI/UX, having the url bar in the middle (top of keyboard) like that just seems so clunky. Plus how huge it is vs the size now. I’m sure it’ll be a transition at first, and I’ll get used to it. But I wonder why the change when macOS Safari is still at the top of the page.
Score: 7 Votes (Like | Disagree)
Read All Comments