Apple looks increasingly unlikely to expand its LiDAR Scanner to the entire iPhone 13 lineup this year, despite some rumors to the contrary. 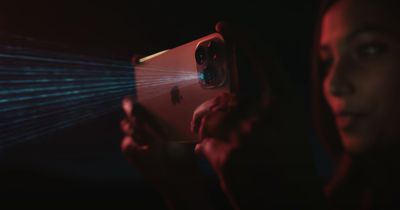 The LiDAR Scanner is a small sensor that uses 3D sensing to measure the distance to surrounding objects up to five meters away. This technology allows for enhanced augmented reality experiences and other unique capabilities, such as the ability to measure a person's height instantly.

Apple introduced the LiDAR scanner on the iPad Pro in March 2020, and later expanded it to the iPhone 12 Pro and Pro Max. Since then, there have been conflicting rumors about whether Apple will bring the feature to all iPhone 13 models in 2021.

A DigiTimes report in January first suggested this was part of Apple's plans for its next flagship lineup, and that we could expect LiDAR in the iPhone 13 mini and standard iPhone 13. Apple frequently introduces new features or specs on higher-end devices before trickling them down to lower-end devices in later years, so the claim seemed credible at the time.

Despite that pushback, Wedbush analyst Daniel Ives has twice claimed this year that all iPhone 13 models will feature LiDAR, but support for that idea now seems more elusive than ever.

Leaker "Dylandkt," who has been accurate in the past about Apple product details before they were launched, said today that LiDAR is "only coming to the Pro iPhone models," regardless of hints earlier in the year suggesting otherwise.

Even if LiDAR doesn't come to the non-Pro variants of the iPhone 13, we do still expect other camera-related feaures being expanded across the entire iPhone lineup, including sensor-shift stabilization, which will introduce improvements in low light performance and stabilization by reducing camera shake.

There's also the possibility that all iPhones will receive an upgraded Ultra Wide camera lens with a wider f/1.8 aperture, although Kuo believes this upgrade will be exclusive to the Pro models. Lastly, display analyst Ross Young believes the entire 2021 iPhone lineup will use the same camera sensors as the iPhone 12 Pro Max, bringing overall improvements to the lower-end models.

MrJM
I’ve had it on my iPad and now on my iPhone, personally I’m yet to find a use for it!

I believe it does something when taking photos but I can’t say I’ve seen a huge improvement over the 11 pro!
Score: 15 Votes (Like | Disagree)

KrisLord
I don’t think many of us would even know if your phone had a LiDAR feature or not.
I doubt it would drive anyone towards a pro model.
Score: 7 Votes (Like | Disagree)

ian87w
Good. Anything that keeps Apple from increasing the price of the regular iPhone again is good for me. Features like this don't add much to the overall user experience. I'd rather Apple add telephoto lens first to the regular iPhones than this.
Score: 7 Votes (Like | Disagree)

Kylo83
Never used it don’t know why we even have it
Score: 7 Votes (Like | Disagree)

zombierunner
they will put lidar scanners on ipads but won't make a stock calculator app for it. ok.
Score: 7 Votes (Like | Disagree)
Read All Comments