Apple has been fighting an antitrust lawsuit against Blix, the developer of BlueMail, an app that was removed from the App Store in June 2019 after violating Apple's ‌App Store‌ guidelines. 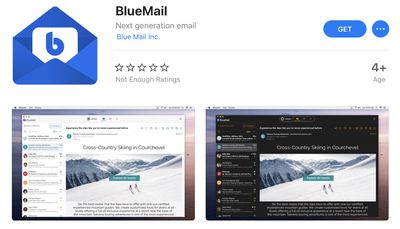 Blix accused Apple of manipulating search results in its ‌App Store‌ to suppress third-party competition, and it also claimed that Apple had copied its patented messaging technology for the Sign In with Apple feature.

Blix had its lawsuit dismissed in December, but then refiled. Apple asked the judge to toss out the case, and the motion was granted, with the case being dismissed a second time on Friday. In a statement, Apple said that Blix had "alleged false conspiracy theories and anti-competitive claims," and that the judge's decision confirms that Apple has "consistently acted legally."

"Blix, a member of the Coalition for App Fairness and frequent complainer to press and regulators, alleged false conspiracy theories and anti-competitive claims against Apple. The court correctly rejected these claims and threw out Blix's case. This case demonstrates that Apple has consistently acted legally by introducing its own innovative products and features that promote competition."

According to the judge, Blix was unable to prove in court that Sign In with Apple restricted competition or that Apple's actions were harming competition.

Apple's current policy of requiring Sign In With Apple whenever any SSO product is offered permits new competitors and competition (including Blix) because it does not foreclose the use of other SSOs. Allowing competition is the opposite of unlawfully constraining competition, so, again, Blix has failed to state a claim.

Blix is one of several major developers that have joined the anti-Apple Coalition for App Fairness, a group that is against Apple's alleged anti-competitive policies and ‌App Store‌ fees. Other members include Spotify, Basecamp, Corellium, Epic Games, and Tile, all companies that have also had legal issues with Apple.

Update: In a statement, Blix said that it is disappointed by the court's decision.

Blix accurately described Apple’s monopoly power in mobile OS, and Apple chose not to contest that in court. At the same time, we are disappointed by the court's decision to somewhat signal that Apple can put sand in the gears to competitors and change its developer guidelines as it sees fit. This includes kicking BlueMail off the App Store for 8 months, stonewalling BlueMail for many weeks a year later and various other bullying tactics. These are facts that Apple did not refute in court.

We are glad that the fairness movement we’ve started for app developers to speak out the truth against Apple continues to gain momentum and we have high hopes that the Biden administration, the EU Commission, Australia and other countries will limit Apple's disproportionate power.

Blix will continue to fight for the fundamental and essential app developers’ rights and will stand firm in allowing fair and balanced competition. The digital markets would be much more innovative had Apple allowed for true competition. The ability to innovate by small businesses continues to be at stake.

Art Mark
Companies could try and make great products that people want or they can continue to pretend there is a monopoly at play. Pick which you direction you support.
Score: 13 Votes (Like | Disagree)

How-best to circumvent Apple's Stranglehold on App Discovery is the #1 challenge most App Devs have !

That's at the core of the problem.

Apple's cut is secondary, except to the companies who are already a Household Name !

"App Discovery" App Stores would go a long ways towards Fixing the Problem !

Apple would NO longer be able to Control the Narrative.

Why we don't have those already, at least here in the States, is very puzzling to me.

Congress has clearly been asleep at the wheel.

Or perhaps, Apple has been greasing their RE-election pockets (to prevent action) !

ONE Prime Example is all it will take for the App Store to be Broken Up !

IMO, "Suppression of Third-Party App Innovation" will very-likely be the Catalyst for the Break Up.

To protect Cook & the Apple brand, that is.

I7guy
So a app that isn't popular means that Apple is guilty of anti-competitive behavior? Seems they are attempting to weaponize the legal system.
Score: 6 Votes (Like | Disagree)

What examples would those be?
Score: 6 Votes (Like | Disagree)

I'm missing something here. If I want to build my own SSO method and make it the exclusive option for my App, and Apple says no, you have to also include SIWA along side it, even if I don't want that...how exactly is that not anti-competitive behavior?

If you build your own method Apple doesn't require you to add SIWA. It's when you use a 3rd party one.

However, I'm a bit at a loss how even forcing SIWA on every app is anti-competitive if they aren't taking away the ability to use yours still.
Score: 6 Votes (Like | Disagree)