Twitter is considering letting users post select tweets for "Trusted Friends" only. That's the name of a feature the social media platform is testing that would allow users to limit the audience for specific content to a smaller circle of people. 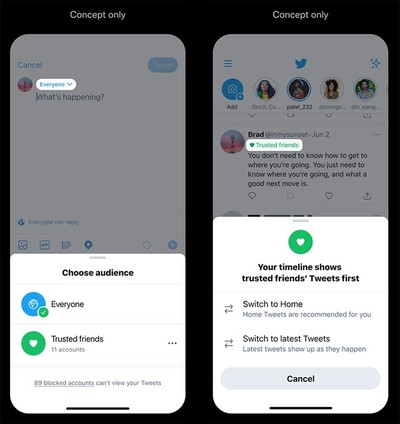 Based on design concepts shared by the company (via TechCrunch), Trusted Friends could be a toggle that lets you indicate whether a tweet should be made public or be shown to just a handful of users. The idea is similar to Instagram's "Close Friends" feature, which lets users share personal Stories more privately.

Bringing the option to Twitter would allow users who have multiple Twitter accounts separating their personal and professional lives to tweet from a single account and have greater control of who sees what on their timeline. It could also mean some users no longer have to toggle between public and protected tweets.

Twitter recently announced new ways for creators and influencers to deliver content to specific users who pay to access its "Super Follow" feature, and Trusted Friends feels like an experimental extension of the idea that would be available to all users. But it's just a concept for now, and there's no guarantee Twitter will ever take it live.

Other concepts Twitter says it is looking into include "Facets," which would give other users the ability to choose whether they wanted to follow all a user's tweets, or only those about the "facet" they're interested in, and an ability for users to list specific phrases that they don't want to see in replies.

As with Trusted Friends, neither of these features are currently in active development and Twitter is simply seeking feedback to gauge whether they're worth pursuing or not.

lsutigerfan1976
Isn’t this basically like group text or something? I’m actually older. And that sort of reminds me of MySpace top friends. Where you only shared certain stuff with them.
Score: 6 Votes (Like | Disagree)

happydude
Just more copy cat from the social platforms. Eventually they’ll all just merge into one and jack and zuckerberg whoever owns tik tok can assimilate into the borg and destroy us all.
Score: 5 Votes (Like | Disagree)
Read All Comments

Wednesday June 16, 2021 2:26 am PDT by Tim Hardwick
Twitter is considering offering users the ability to "unmention" themselves in other people's tweets as part of a wider privacy drive for the social media platform. The early concept has been shared by Twitter designed Dominic Camozzi, who says the idea behind it is to help users control unwanted attention. An example image shows a notification when the user has been mentioned in a tweet, ...
Read Full Article • 17 comments