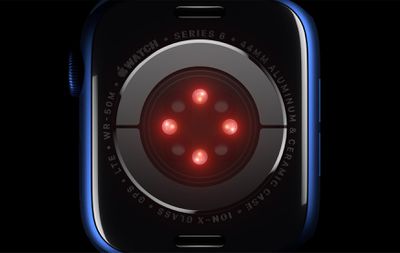 ‌iOS 15‌, Apple's recently-announced major software update for the iPhone, features a number of additions to the Health app, such as the ability to share health data with other people, trends, new metrics for walking steadiness, and more.

According to a ETNews, the ‌Apple Watch Series 7‌ will feature blood glucose monitoring via a non-invasive optical sensor. Subsequent disclosures about Apple's business partners have suggested that the company is looking to add a new blood glucose sensor to the Apple Watch in the immediate future.

The Apple-designed blood glucose optical sensor is believed to be a skin-top continuous monitoring solution that does not require an implant. The company is said to have secured patents around the technology and reportedly established a team of biomedical engineers and consultants to specifically work on sensors for non-invasively monitoring blood sugar levels in 2017.

‌iOS 15‌ code seen by MacRumors suggests that users will be shown blood glucose highlights, along with heart rate and respiratory rate data, after a workout or upon waking up, with large amounts of data being gathered during exercise and sleep.

While it is not necessarily related, there are clear parallels to the Apple Watch's extensive workout and sleep tracking features, suggesting that Apple Watch blood glucose monitoring would integrate well with the device's existing capabilities and systems.

The Apple Watch Series 7 is expected to launch later this year. While there have been reports of micro-LED displays and solid-state buttons with haptic feedback for the Apple Watch, these features are not expected to arrive this year. Instead, Bloomberg's Mark Gurman has said we can expect a display with slimmer bezels, a faster chip, and upgraded Ultra Wideband connectivity.

Monday October 25, 2021 3:34 am PDT by Sami Fathi
Apple's suppliers are currently developing components for next-generation sensors in the Apple Watch Series 8 that will allow users to measure their blood glucose level, according to a new report. According to a paywalled report from DigiTimes, Apple and its suppliers have begun working on short-wavelength infrared sensors, a commonly used sensor type for health devices. The new sensors,...
Read Full Article • 139 comments

Wednesday September 1, 2021 6:25 am PDT by Hartley Charlton
Apple is planning to add a raft of new health features to the Apple Watch, including blood-pressure trends, a thermometer for fertility and sleep tracking, sleep apnea detection, and diabetes detection, as well as a number of updates for existing models, according to the Wall Street Journal. Sources who claim to be familiar with Apple's plans and have access to internal company documents...
Read Full Article • 112 comments

Monday January 10, 2022 5:04 am PST by Tim Hardwick
Apple's plan to add a body temperature sensor to the Apple Watch Series 8 is looking increasingly unlikely, based on recent comments made by well-connected Bloomberg reporter Mark Gurman. Apple is believed to have originally considered adding a body temperature sensor to last year's Apple Watch Series 7, but that didn't happen, with Bloomberg reporting in June that it would likely be...
Read Full Article • 86 comments