Apple is reportedly eyeing a new partnership with LG that would allow the South Korean tech giant to sell iPhones, iPads, and Apple Watches at its more than 400 retail "LG Best Shops" in South Korea, according to a report from Business Korea. 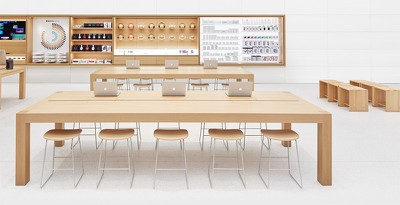 LG recently shut down its smartphone business, leaving retail space previously used for marketing its handsets being left empty. Apple is now, apparently, eyeing to use that retail space to sell its own iPhones, iPads, and Apple Watches. Apple's own retail presence in South Korea is still relatively small, and accepting a deal with LG to sell its products at more than 400 "LG Best Shops" is an easy way to expand its presence.

The two companies are reportedly discussing the establishment of separate Apple corners within the shops that are directly run by Apple employees or allowing LG Best Shop employees to sell Apple products after LG Electronics acquires the right to the sale of Apple products. The two sides have yet to decide when the partnership starts, but some market experts predict that it will be some time after the end of July when LG Electronics completely pull out of the smartphone business

According to the report, LG and Apple are at a disagreement over the sale of Mac computers. LG sells its own "Gram" laptops, and offering Apple's Mac in the store would be a disadvantage. As a result, the two sides are likely only to agree on selling iPhones, iPads, and Apple Watches. An LG spokesperson said in a statement to Business Korea that "nothing has been decided yet" and that they're "exploring all possibilities."

Update: According to a new local report, LG has suspended talks with Apple to potentially sell iPhones, iPads, and Apple Watches at its "LG Best Shops" across South Korea. The report notes that LG has been spectating public opinion around the prospect of a partnership with Apple and has ultimately decided to discontinue talks.

Lategamer
If Apple is selling their stuff in the LG stores, do you think they should be paying for the privilege? I mean, LG will get a cut, right?

Stick that up your Epic Pipe, Tim Sweeney
Score: 9 Votes (Like | Disagree)

Hexley
Make Apple pay through the nose for LG's retail rent space and do not allow them to push Macs.
Score: 3 Votes (Like | Disagree)

Looks like Apple is collaborating more with other companies to boost sales. very smart!

LG company is very huge in Japan and other Asian countries.

except if you find out that apple already has 2/3 of the japanese market, and the rest is dominated by local brands as kyocera, sony.

kyjaotkb
I mean, LG’s mobile operator U+ is presumably already one of Apple’s top resellers in Korea, so technically LG has been selling iPhones in their own shop for a while already.
The big question is, will these shops stock any 5K monitors? Hmmm…
Score: 2 Votes (Like | Disagree)

If Apple is selling their stuff in the LG stores, do you think they should be paying for the privilege? I mean, LG will get a cut, right?

I would say 30% is an industry standard cut.
Score: 2 Votes (Like | Disagree)
Read All Comments

Tuesday July 20, 2021 4:17 am PDT by Tim Hardwick
LG has agreed to sell Apple's iPhones, iPads, and Apple Watches at its "LG Best Shops" in South Korea from August, according to a report by the local Herald Economic Daily. The Apple products will go on sale at 400 LG stores across the country. As part of the agreement between the two parties, all Macs are excluded from the sales, since LG's laptop offerings overlap with Apple computers. ...
Read Full Article • 21 comments

Wednesday June 30, 2021 6:46 am PDT by Sami Fathi
Apple is now keen on utilizing LG's recent shutdown of its smartphone business by adding several flagship LG smartphones to its list of eligible Android devices that can be traded for credit towards a new iPhone purchase. Apple today added some LG smartphones to its list of devices eligible for trade-in towards a new iPhone, including the LG G8 ThinQ for up to $70, the LG V40 ThinQ for up to ...
Read Full Article • 24 comments

Monday March 22, 2021 7:04 am PDT by Hartley Charlton
LG is looking to close down its entire smartphone division after failing to find a buyer for the ailing section of its business, according to the Korea Herald. In January, LG announced that it was considering options for an exit from the smartphone industry, "including sale, withdrawal and downsizing." Though LG was once the world's third-largest smartphone maker and a sizeable competitor to ...
Read Full Article • 88 comments

Thursday September 3, 2020 1:21 am PDT by Tim Hardwick
LG has "no plans" to update its pre-2019 TVs with AirPlay 2 or HomeKit support, despite previously giving customers assurances that they would do so this year. In April, LG indicated in a support document that it planned to add AirPlay 2 and HomeKit support to some of its 2018 smart TVs by October 2020, including LCD models with "SK" or "UK" in the name and OLED models with "B8" through "Z8" ...
Read Full Article • 83 comments

Deals: Shop the Best Tech-Related Back To School Sales From Twelve South, Nimble, Nomad, and More

Friday July 30, 2021 8:23 am PDT by Mitchel Broussard
Back to school season is already upon us, and in order to prepare students for a return to school we're collecting all of the best back to school sales from popular Apple-related accessory companies. These include Nomad, Twelve South, Nimble, Brydge, and more, with plenty of discounts to make a dent in your shopping list, whether it be for a return to in-person school or remote learning. Note: ...
Read Full Article • 1 comments

Wednesday July 28, 2021 12:48 pm PDT by Juli Clover
Customers who visit U.S. Apple Stores will once again be required to wear masks at most retail locations, reports Bloomberg. Apple dropped its mask requirement for vaccinated customers and employees back in June, but earlier this month, Apple began requiring employees in select regions to wear masks and encouraged other employees to do so. Now both customers and employees in areas where...
Read Full Article