Some M1 iMacs appear to have a manufacturing defect that causes the display to be mounted on the stand in a way that's not perfectly aligned, leading to a crooked display. 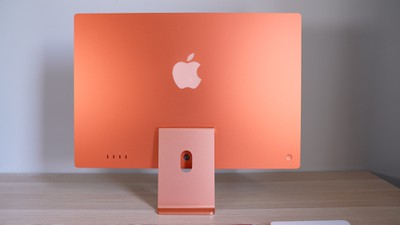 YouTuber iPhonedo over the weekend published a review of the ‌M1‌ iMac, and he found that his machine appeared to be tilted on one side, a mounting disparity that was visibly noticeable and proved with a ruler.


Another person on the Apple Support Communities also complained of a non-level display with a 1mm disparity between the right and the left sides of the display, and there was a third complaint on Reddit, with the person in that situation discovering the issue after watching iPhonedo's video.

Checked mine after watching this and it's also crooked.
Not to the degree of his, but not completely level either.
I'm outside of my return window and I can't take the time hit of not having a machine to work on for a month, but super disappointing that Apple of all companies is shipping units with such a glaring oversight.

Even our own orange ‌M1‌ ‌iMac‌ that we ordered for testing appears to have a slightly crooked display. MacRumors videographer Dan had noticed the ‌iMac‌ was crooked and assumed it was a problem with his desk, but it appears that may not be the case.

There are seven screws holding the ‌iMac‌'s display to the mount, and the manufacturing issue does not appear to be user fixable.

Apple may opt to allow returns of crooked iMacs after the two week return window, but it appears to be a problem that's limited in scale at this time so we don't yet know how support staff will respond. Apple customers who purchase a new ‌M1‌ ‌iMac‌ should check for a crooked display right when receiving a new machine so that it can be returned or swapped out within its two week return window to avoid having to try to get support from Apple.

So far there are only a handful of known iMacs with this manufacturing issue, but let us know in the comments below if you've had issues with the mounting on your ‌M1‌ ‌iMac‌.

AngerDanger
Honestly, I barely even notice…

jonnysods
I'm just glad they came with a stand, and weren't an extra $1K.
Score: 42 Votes (Like | Disagree)

CarletonTorpin
This forum thread has convinced me.

I'm amazed that I didn't notice until now.

SomeMacGuy
My iMac G4 did this too. Is it too late to return it?
Score: 31 Votes (Like | Disagree)

contacos
An adjustable stand would have solved that haha
Score: 29 Votes (Like | Disagree)
Read All Comments

Friday June 25, 2021 6:41 am PDT by Mitchel Broussard
Amazon this week has a sale on Apple's new 24-inch M1 iMac in two configurations. Sales start with the 7-core GPU with 256GB, priced at $1,249.99, down from $1,299.00. This sale is available in Blue and Silver. Note: MacRumors is an affiliate partner with Amazon. When you click a link and make a purchase, we may receive a small payment, which helps us keep the site running. This sale is a...
Read Full Article • 32 comments

Friday September 10, 2021 12:17 pm PDT by Juli Clover
We're not expecting new Macs to debut at Apple's upcoming "California Streaming" event, but according to Bloomberg's Mark Gurman, Apple is making one small tweak to its Mac sales plans. After the September 14 event, Apple retail stores will begin selling the 24-inch iMac in all colors, which will mean all seven colors will be able to be purchased in store. Right now, Apple's retail stores ...
Read Full Article • 43 comments

Friday June 11, 2021 6:39 am PDT by Mitchel Broussard
Amazon today is taking $49 off Apple's new 24-inch M1 iMac in two configurations. Sales start with the 7-core GPU with 256GB, priced at $1,249.99, down from $1,299.00. This sale is available in Blue and Silver. Note: MacRumors is an affiliate partner with Amazon. When you click a link and make a purchase, we may receive a small payment, which helps us keep the site running. Amazon...
Read Full Article • 24 comments

Tuesday August 31, 2021 7:00 am PDT by Juli Clover
Joby today announced the launch of new MagSafe-compatible mounting options that are designed to work with the popular GorillaPod tripods. The GripTight Mount for MagSafe attaches to an iPhone 12 model using magnets and it features a hybrid clamp for use in both portrait and landscape mode. There's an included 1⁄4" - 20 tripod mount that's compatible with the GorillaPod or other tripod...
Read Full Article • 10 comments