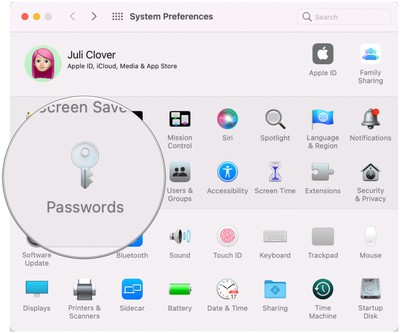 In System Preferences, there's a new "Passwords" section that houses all of your ‌iCloud‌ Keychain logins and passwords so they're easier to get to, edit, and manage. There's a similar Passwords section that's been on iOS for some time now, so now there's one streamlined way to access your passwords across Apple devices.

Prior to now, passwords on Mac were accessible through the Preferences interface in Safari, but the System Preferences option is easier to find. As with the prior version of the feature, Safari will suggest passwords automatically and detect compromised passwords for you.

There's also a built-in authenticator feature, which is coming to iOS and iPadOS 15 too. For sites and apps that use codes for two-factor authentication, you can store those codes right in ‌iCloud‌ Keychain and have them autofilled when you log in.

Direct authenticator support will allow iPhone and Mac users to choose to use Apple's solution over third-party apps and software like Authy and Google Authenticator.

The ‌macOS Monterey‌ password changes are live now in the developer beta, with Apple planning to release a public beta in July before the software sees a public launch this fall.

spawnofbill
Does... Does no one know about the Keychain Access app in the Utilities folder? It's been there since 10.5! It's synced to iCloud Keychain since day one.
Score: 53 Votes (Like | Disagree)

What I would really like is for Apple to stop trying to force us to use 2 factor authorization.
If we don't want it, we don't want it. Get that stupid red dot off of System Preferences

2FA can make the difference on a hacking attempt. Some day you will appreciate it.
Score: 42 Votes (Like | Disagree)

Goldfrapp
Still missing a couple of important things that 1Password has:

- Option to upload attachments that, for example, contain backup codes

HeavenDynamic
Much needed addition. Going to Safari preferences to see my passwords always felt like a 2010 experience.
Score: 17 Votes (Like | Disagree)

Amacfa
Does anyone actually use memoji’s? I was cool when it launched but now seems like a graveyard, yet it remains apples major focus….sigh
Score: 13 Votes (Like | Disagree)

zalusky
I am a 1password fan and share password records with my wife as well as have a lot of secure notes like passports, vax records, and a lot of other stuff. It's more than just passwords we may need in an emergency.
Score: 8 Votes (Like | Disagree)
Read All Comments