Apple this week released Boot Camp version 6.1.15 for users running Windows on a Mac, as noted in a Reddit post spotted by The Verge. 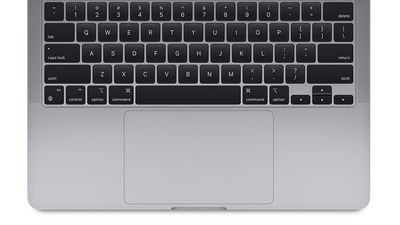 The update adds support for more precise trackpad gestures on MacBooks running Windows, including a single tap to click, tapping the lower-right corner to right-click, swiping down to scroll up, and various multi-touch gestures using three or four fingers.

Support for these precise trackpad gestures while running Windows is available on Macs with Apple's T2 chip, according to an Apple user guide.

Boot Camp allows Windows to boot natively on Intel-based Macs. The utility is not available on Macs with the M1 chip.

Apple choosing to make their new drivers only for Macs with T2 is 100% planned obsolescence. They have direct access to the hardware and original source code, yet can't accomplish what some kid in their mom's basement is capable of?
Score: 10 Votes (Like | Disagree)

Why is it a screenshot of Parallels when the article is about Boot Camp? ?

Kylo83
This is why I don’t wanna give up my 16” MacBook Pro; I do light windows gaming in bootcamp and unless windows comes to arm I’m staying away from the m1
Score: 8 Votes (Like | Disagree)

ignatius345
I guess they're throwing Intel Mac users a bone after announcing a ton of Apple Silicon-only features this week...
Score: 6 Votes (Like | Disagree)

So you really need a T2 chip for better Trackpad support?

Even older Macs which do not have the T2 chip have the same and better Trackpad gestures present in the latest Macs.

The T2 chip is a security chip and does not play any role in Trackpad gestures.
Score: 5 Votes (Like | Disagree)

I am not an Apple engineer, but I'd deduce that what is going on here is they are using spare processing capacity on the T2 chip to handle this. It could be doing the same on macOS, but we wouldn't know since we're not privy to the details. It is also possible they pass built in trackpad and keyboard input data through the T2 chip on T2 equipped Macs for extra security.

There is a reason for it. Even if that reason isn't immediately apparent to us.

Apple could have added the better trackpad support to older Macbooks without the T2 chip if they put their mind to it. They simply chose not to. This is just like how they did not ('https://forums.macrumors.com/threads/several-macos-monterey-features-unavailable-on-intel-based-macs.2300086/') make some features available on the Intel Macs. Even simple features like 3D map, an interactive globe and etc.

What other reason is there? They are simply lazy and do not care.

Some users even made third party drivers which mimic the normal macOS gestures for their Windows Mac. If they can do it why can't Apple?

This update is actually a long overdue one.
Score: 5 Votes (Like | Disagree)
Read All Comments

Wednesday December 1, 2021 2:11 pm PST by Joe Rossignol
Apple today seeded the fourth beta of macOS Monterey 12.1 to developers for testing, and while the much-anticipated Universal Control feature is still not enabled, the latest beta does appear to resolve an issue with the "Tap to Click" trackpad gesture. Since the release of macOS Monterey earlier this year, some users have reported that the "Tap to Click" trackpad gesture would...
Read Full Article • 59 comments

Tuesday September 14, 2021 4:16 am PDT by Tim Hardwick
Macs powered by ‌Apple silicon do not support Windows and there is no Boot Camp feature like there is on Intel Macs, but support for Windows is a feature that many users would like to see. However, Microsoft has dampened hopes that Windows will ever work on Apple silicon, saying that running an Arm version of Windows 11 on M1 Macs, via virtualization or otherwise, is not "a supported...
Read Full Article • 175 comments

Friday October 15, 2021 3:12 am PDT by Tim Hardwick
Parallels Desktop 17.1 for Mac has ">just been released, offering improved support for Windows 11 virtual machines and added stability via the default implementation of Virtual Trusted Platform Modules (vTPMs) for "all future and past Windows 11 VMs." Parallels 17.1 also fully supports macOS Monterey as a host OS and improves the user experience when running macOS Monterey in a VM on M1 Macs. ...
Read Full Article • 95 comments

Monday November 22, 2021 12:56 pm PST by Juli Clover
Microsoft has declined to make a version of Windows 11 available for Apple's M1, M1 Pro, and M1 Max Macs that are built on an Arm architecture, and now we may know the reason - a secret exclusivity deal with Qualcomm. Subscribe to the MacRumors YouTube channel for more videos. According to XDA-Developers, Arm-based Windows has only been made available on devices with Qualcomm SoC's because of ...
Read Full Article • 311 comments

Thursday December 2, 2021 7:36 am PST by Joe Rossignol
Apple's chipmaking partner TSMC has kicked off pilot production of chips built on its 3nm process, known as N3, according to Taiwanese supply chain publication DigiTimes. The report, citing unnamed industry sources, claims that TSMC will move the process to volume production by the fourth quarter of 2022 and start shipping 3nm chips to customers like Apple and Intel in the first quarter of...
Read Full Article • 202 comments