As part of its annual survey given to developers at the end of WWDC, Apple is asking community members whether, following two years of the conference behind held in a digital format, they would be open to attending an in-person conference. 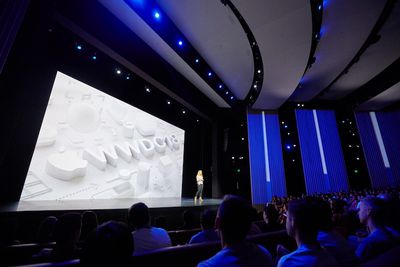 Image Credit: Axel Boberg
Due to the global health crisis, Apple has held its typically in-person Worldwide Developers Conference in an all-digital format for the past two years. The digital format, which includes a pre-recorded keynote from Apple Park and several sessions available online for free, has been loved by many in the community due to its openness and inclusiveness.

Unlike the in-person conference, the online format has allowed Apple to reach millions more developers and users worldwide. Now, as the world begins to see the light at the end of the tunnel, Apple is possibly planning to return to an in-person conference next year while still retaining some aspects of a digital format.

One of the questions as part of this year's end of WWDC survey reads, "How likely would you be to attend an in-person conference after experiencing an all-online event?"

While not totally indicative, it is worth noting that Apple is beginning to receive and collect feedback regarding the community's outlook towards possibly returning to the in-person conference. Bloomberg's Mark Gurman has previously noted that Apple is contemplating the idea, and does plan to hold its first in-person event since the global health crisis began in the coming months.

HeavenDynamic
A screen will never replace the energy of being together.
Score: 51 Votes (Like | Disagree)

idmean
I find these online sessions lacking personality. They are so mechanical and too flawless. I much prefer the presentations given in front of a live audience.
Score: 49 Votes (Like | Disagree)

fishkorp
it should be hybrid. Return to in person for those willing to attend, but keep it also online for those not lucky enough to win the WWDC lottery. I was never selected in any of the 3 years I tried to go. These last 2 were kind of refreshing.
Score: 44 Votes (Like | Disagree)

I find these online sessions lacking personality. They are so mechanical and too flawless. I much prefer the presentations given in front of a live audience.

Not only that, traveling to the Apple campus as a developer and meeting not only Apple staff but other developers from all over the world must be a unique experience.
Score: 31 Votes (Like | Disagree)

Apple_Robert
I think Apple should stick to the new video only format. I think it works well and removes the expensive price tag for a ticket.
Score: 25 Votes (Like | Disagree)

Rychiar
why not? everything else is back
Score: 17 Votes (Like | Disagree)
Read All Comments